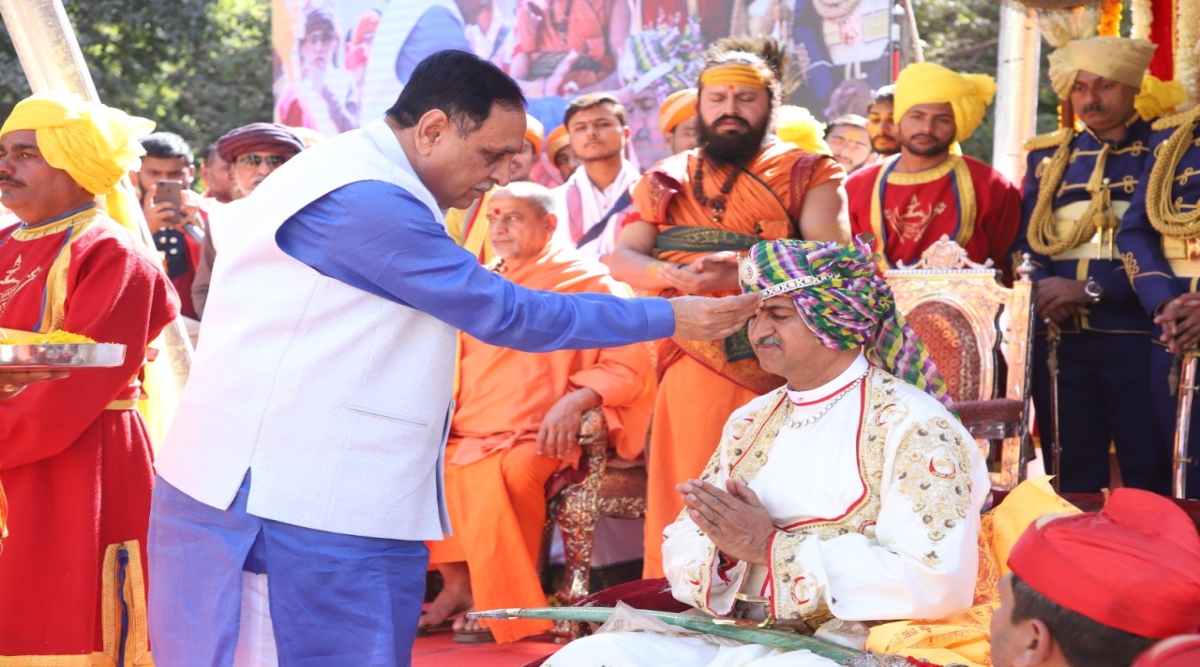 India may have achieved freedom in the year 1947 and today we have elections in every state and districts to elect people to power. But back then, there used to be a formal coronation ceremony which was an official transfer of the State, its subjects, titles and powers to the next person to the title of the crown. The very same tradition and customs were observed recently at the coronation of H.H Thakore Saheb Mandhatasinhji Jadeja of Rajkot at the Ranjit Vilas Palace from January 27 to January 30, 2020. Mandhatasinh Jadeja was crowned as the 17th king of the over 400-year-old erstwhile princely state of Rajkot in Gujarat in a grand ceremony on January 30. The event saw a lot of traditional rituals like the Talvar Raas, Rajya Abhishek and Diyautsav over the span of three days.

The coronation ceremony started four days prior before the King's ascending to the throne. The first day saw several pujas and prayers which are aimed at soul purification. A Vishnu pooja is held to get blessings from the Lord. One of the main rituals is a Rajasuya 'yagya' which is prescribed as a means to establish a king's sovereignty. Over 300 priests perform this ritual. The ceremony attempted to set three World Records -- Talvar Raas, Rajya Abhishek with pouring of sacred water on Thakore Sahib and Diyautsav (lighting earthen diyas). The Talvar Raas which is a traditional sword dancing with over 2,000 to 2,500 performers!

Check Some Pics From the Traditional Ritual: 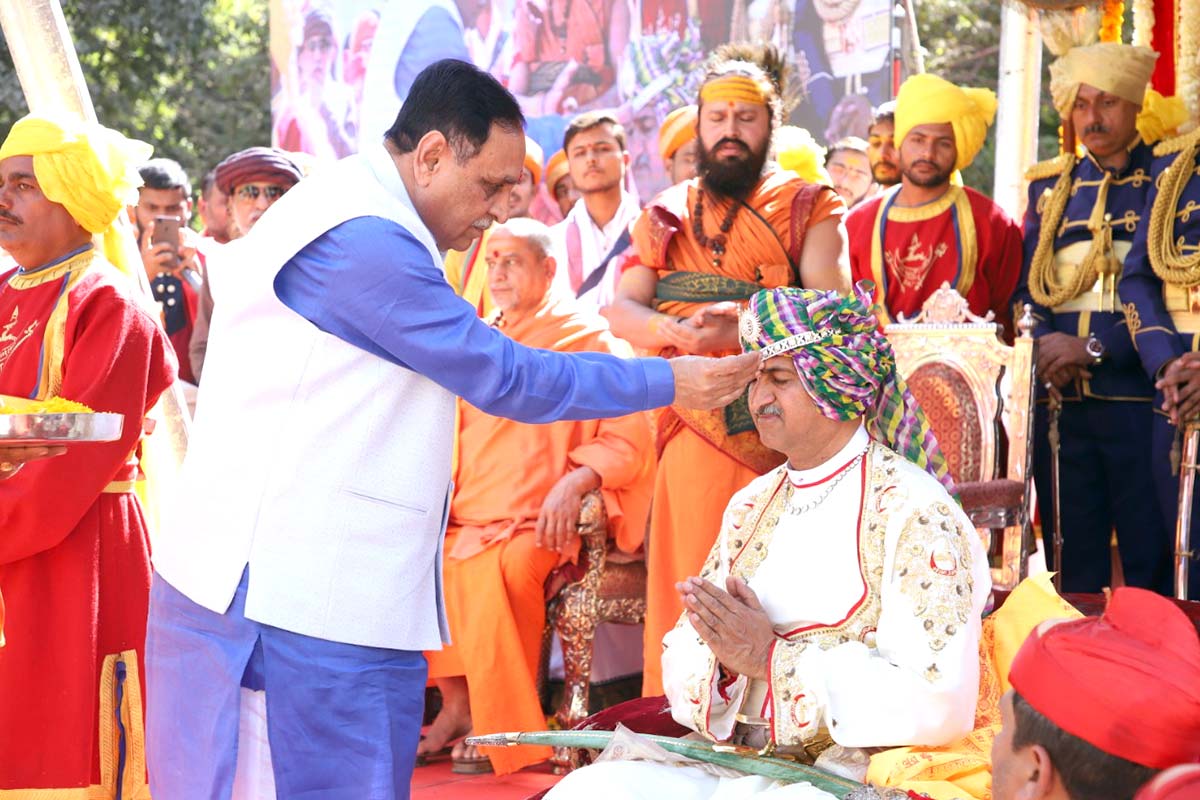 The Talwar Raas is a dance of valour and courage carried out in traditional attire. After this, the newly-crowned King was taken out for a procession throughout Rajkot which had vintage cars, elephants, horses and musicians in tow.

Some Pics From the Procession of The King: 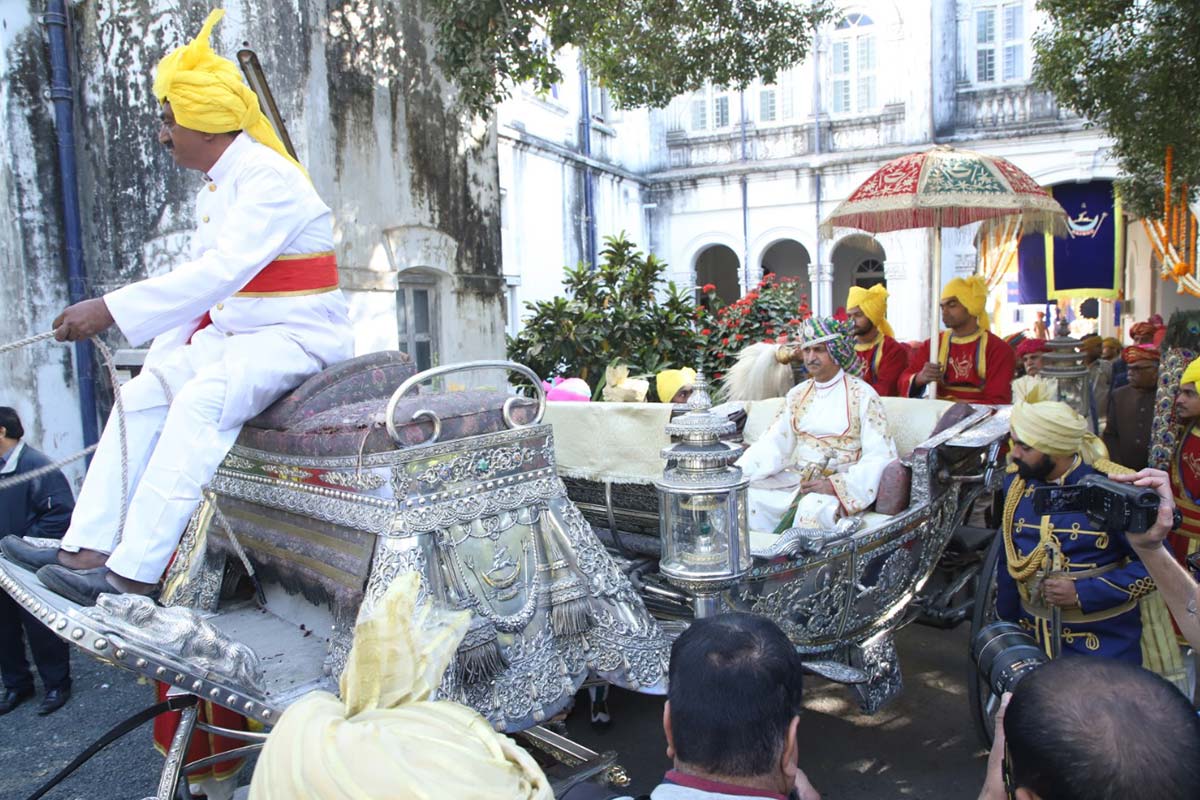 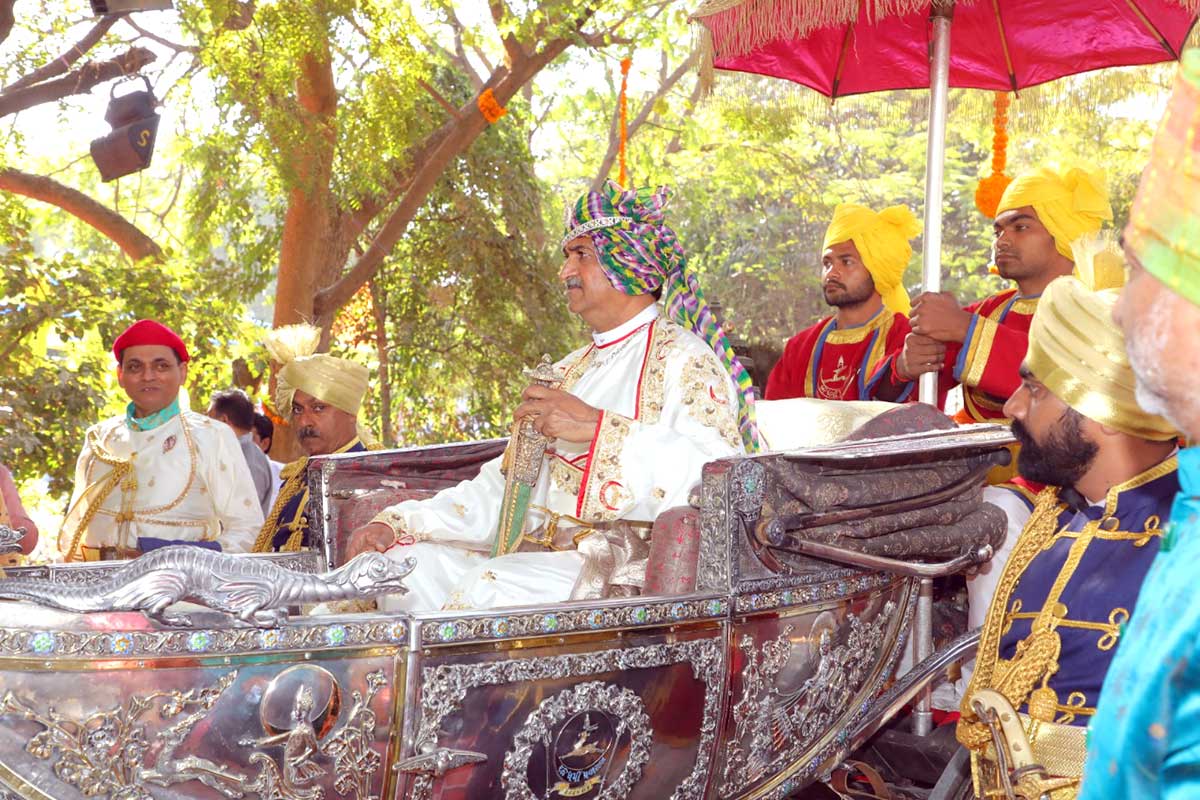 This procession also had the kings of 96 erstwhile princely states from other states in participation. During the Rajya Abhishek sacred water collected from sacred rivers of India with 100 types of herbs was poured on the king by 300 saints.

Some More Pics From the Coronation Ceremony: 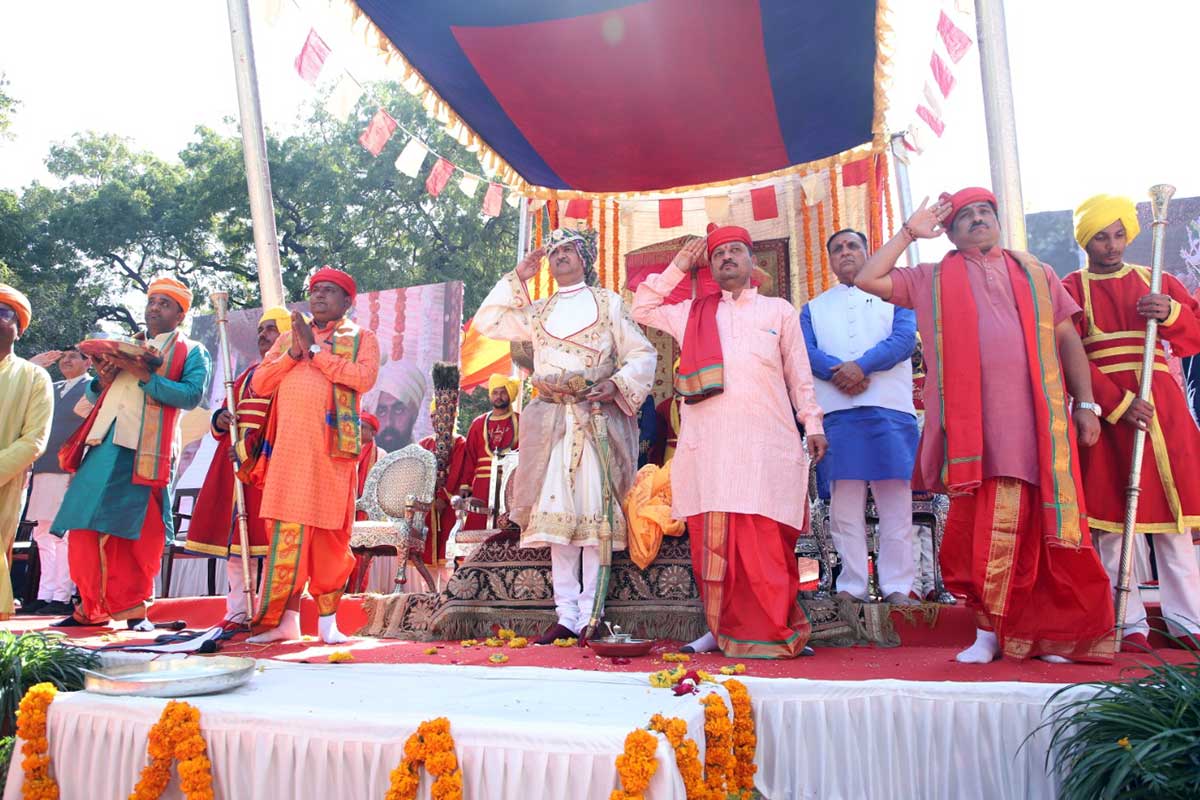 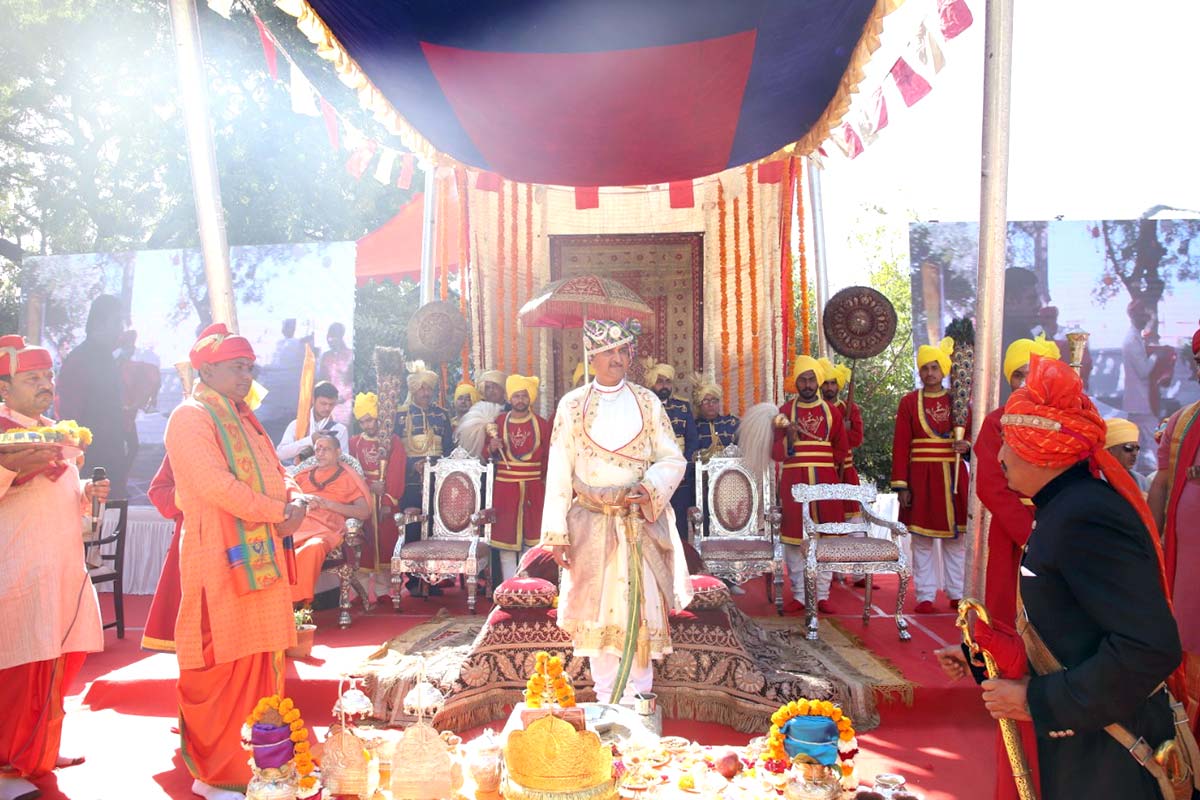 These rituals are a way of reliving and respecting the age-old and rich customs of this country and celebrating the pride in them. The first day saw all the pujas with body cleansing rituals. On January 28th, there was Rajshuya Yagya, Ganpati poojan, Nagar Yatra which is a procession through the city to get blessings from citizens. January 29th saw chief prayers, Rajya Abhishek and also the Deep Mala event. The event broke the world record for Rajkot State emblem with more than 5000 eco-friendly diyas. January 30th had a Gadi pooja, Raj Tilak and Manpatra ritual (a formal appointment). Several ministers, religious leaders and members of erstwhile royal families from other parts of the country were a part of this event.