Canada New Year's Eve 2021 Celebration: Toronto To Ring in 2022 With Virtual NYE Celebration; Know When and Where To Watch Live Streaming

Toronto city officials are advising people to enjoy the celebration safely from home. This move is in response to curb the further spread of highly contagious COVID-19. 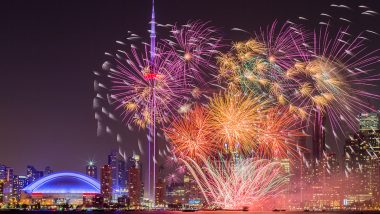 The City of Toronto’s New Year’s Eve celebrations will be streamed online for the second year in a row due to COVID-19. The city officials said that the show consists of a lineup of pre-recorded performances from Toronto's music venues, followed by impressive fireworks viewable from anywhere with views of Lake Ontario on the Eve of New Year.

The livestream will be offered on the City of Toronto’s @culture_to YouTube channel at New Year’s Eve Livestream Concert & Fireworks beginning at 10:30 p.m. https://t.co/tcbpquJLnt

As per the reports, Toronto's New Year’s Eve 2021 Livestream Concert and Fireworks will be streamed online at the City of Toronto’s CultureTO YouTube page at 10:30 pm on December 31.

Toronto’s New Year’s Eve 2021 celebrations will be emceed by television personality Devo Brown from a closed studio set. While performance lineup has names like Andy Kim, Dwayne Gretzky, and Tamar Ilana, among many others.

(The above story first appeared on LatestLY on Dec 31, 2021 03:30 PM IST. For more news and updates on politics, world, sports, entertainment and lifestyle, log on to our website latestly.com).