Lal Bahadur Shastri was born on October 2, 1904, in the Mughalsarai district of Uttar Pradesh. The Indian statesman and politician shares his birthday with Mahatma Gandhi. He became the Prime Minister of India in 1964 and led the nation during the India-Pakistan war in 1965. 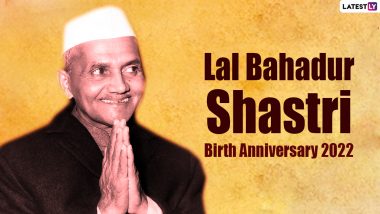 Hundreds of great freedom fighters sacrificed their lives to free India from the clasps of British rule. One of the leading propagators of the country's freedom struggle is Lal Bahadur Shastri, who fought primarily for the poor section of the nation. Born on October 2, 1904, to Sharada Prasad Srivastava and Ramdulari Devi in Mughalsarai, Lal Bahadur Shastri was the 2nd Prime Minister of India from 1964 to 1966. He also served as the sixth Home Minister of the country from 1961 to 1963 and promoted the White and Green Revolution in India. Lal Bahadur Shastri Jayanti  2022 date is Sunday, October 2. On January 11, 1966, he breathed his last breath in Tashkent after a cardiac arrest. Herein we bring you everything about the national observance, from Lal Bahadur Shastri Birth Anniversary 2022 history to its importance. 6 Values Today’s Politicians Can Learn from the Ex-Prime Minister of India.

The freedom fighter shared his birthday with Mahatama Gandhi on 2 October. Lal Bahadur Shastri is known for initiating historical campaigns like the White Revolution, a movement that supported the production of milk. In 1965, he also promoted the Green Revolution in India, which focused on farmers' prosperity and making India self-reliant in foodgrain production. Going back to his earlier life, the politician joined the Kashi Vidya Peeth in Varanasi, wherein he came under the influence of the most prominent intellectuals and nationalists of the country. He joined the freedom struggle in 1920 and took part in the Non-Cooperation Movement with Gandhi Ji in 1921. Shastri's most renowned moment came when he led India in the 1965 Indo-Pak War.

Lal Bahadur Shastri is known as "The Man of Peace" as he always preferred the path of non-violence instead of aggression. He was awarded the Bharat Ratna, India's highest civilian award, posthumously in 1966. The renowned Indian statesman and politician coined the famous slogan 'Jai Jawan Jai Kisan', which resonated with the masses and was widely acknowledged. Many noted him as a polite and humble human who was an important figure during the freedom struggle and rose to eminence after independence.

(The above story first appeared on LatestLY on Sep 30, 2022 11:27 AM IST. For more news and updates on politics, world, sports, entertainment and lifestyle, log on to our website latestly.com).