The much-loved ex-prime minister of India is also remembered for his strength of character over everything else. Power-hungry politicos of our time and age can learn some crucial lessons from Lal Bahadur Shashtri’s life. 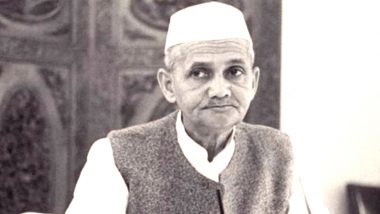 We may be no GK buffs but we sure know when the Father of The Nation, Mahatma Gandhi was born, October 2, celebrated all over the country as Gandhi Jayanti. But the Mahatma also shares his birthday with another great Indian leader– Lal Bahadur Shastri. The second prime minister of India, Shastri held the office from 9 June 1964 to 11 January 1966. Shastri was an exemplary leader who was responsible for major milestones in Indian history such as the White Revolution. His best-remembered slogan “Jai Jawan, Jai Kisan” boosted the morale of the soldiers and the farmers alike. The much-loved ex-prime minister of India is also remembered for his strength of character over everything else. Power-hungry politicos of our time and age can learn some crucial lessons from Lal Bahadur Shashtri’s life. Lal Bahadur Shastri Ji's Birth Anniversary: 'Jai Jawan, Jai Kisan' and Other Inspirational Quotes by the Second PM of India.

There’s no place for honour in Indian politics anymore. But things were different back in 1956 when Lal Bahadur Shastri was the Railway Minister of India. During his tenure, on November 23, 1956, the disastrous Ariyalur train accident took place, which left 142 passengers dead, 110 injured and around 200 buried under the debris.

Shaken by the tragedy, Shastri tendered his resignation from the post of railway minister. Prime Minister Nehru commented to the media after Shastri’s resignation in the light of the accident: “All of us are very unhappy over the tragedy but I am sure - in fact, I know it - that probably the unhappiest among all of us is the Railway Minister." Gandhi Jayanti 2018 Wishes: Photos of Gandhiji, WhatsApp Messages, GIF Images, Facebook Status to Send Greetings on October 2, International Day of Non-Violence.

Shastri felt a deep sense of accountability for the tragedy. He was under no obligation to resign, but he thought it was his moral responsibility to do so, a thought that is often missing in the new generation of politics.

A well-known anecdote about the ex-prime minister reveals that he was a man of immense self-respect. He once visited a textile mill and was taking rounds of the place along with the owner of the mill. A few sarees were on display, which caught Shastri’s attention. He told the mill owner that he was interested in buying some sarees for his wife.

The owner immediately brought out some exquisite-looking sarees. When Shastri asked for the cost of the garments, he was told that they ranged from Rs 400 to Rs 800, quite expensive considering this was the 60s.

Shastri being a man of great character said that he would never accept expensive gifts just because he was the Prime Minister. He politely declined and chose to buy a less expensive saree for his wife.

Politics today is also a perception battle. What you are is what you seem to the people. These days, politicos hire stylists to help them carefully craft an image of themselves so that they can appeal to the people. But Shastri was different.

He was someone who espoused Gandhian values and he made sure that they are reflected even in the clothes he wore. The ex-prime minister was always clad in the simplest of attire. He wore kurtas and dhotis even after he assumed the office of the Prime Minister. His simple clothes were made of handspun khadi.

He also didn’t have an entourage of gourmet chefs to cook him exotic foods. Shashtri was a man of simple tastes, quite literally. A vegetarian, he relished a simple dish of arhar daal and roti.

Another anecdote reveals how Shastri never exploited his position for any kind of personal gains. He passed down these values also to his children. His son Anil once stood in a line to deposit admission fees at St Stephen’s College in Delhi. When they asked him for his father’s name, the staff were stunned to know that the son of the Prime Minister was standing in the line like the others without wanting any special treatment meted out to him.

Once, his sons had used Shastri’s office car to make personal trips. When he came to know about this, he promptly deposited money into the government account to compensate for the expenses incurred while using the car.

5 Practising What He Preached

How many leaders can lead by example? Shastri was one of them. In 1965, the Indo-Pak war broke out, and the country was at the brink of a severe food shortage. Shastri had to steer his country out of this situation somehow. The country also faced pressure from the United States, who threatened to cut food supplies around the time of the war.

One evening, he announced at his household at the no food be cooked in the evening. He said that while the children will be given food and milk, the adults will go without any food. After his announcement, no evening meals were prepared in the Shastri household for a week. Only after he felt that his family could do it did he announce it to the entire country. He reached out to his countrymen through All India Radio, asking them to sacrifice an evening meal so that the country can tide through the food shortage.

Post politicians today, with a few exceptions, are known to amass a huge fortune in the course of their political career. In fact, politics is seen as more as a career for selfish gains than for selfless service. But Shastri was never swayed by the allure of wealth. He was an honest man all throughout his life and he stayed that way till the day he died.

When he passed away in 1966, all he had in his name was a loan he took to buy a Fiat car for himself. With no house or land in his name, Shastri died a poor but honest man. Even after his death, the loan for the car was repaid by his wife Lalita Shastri with the pension she received after her husband’s death.

Shastri was a man of diminutive stature but a giant in his own rights when it comes to his abilities and character. Never before had India seen a politician who had so much integrity, and perhaps the country may see no other. Let’s remember him today on his 114th birth anniversary.

(The above story first appeared on LatestLY on Oct 02, 2018 10:00 AM IST. For more news and updates on politics, world, sports, entertainment and lifestyle, log on to our website latestly.com).