The festivities celebrated on January 14 are Makar Sankranti is celebrated in the Western parts, Lohri by North Indians and Sikhs, Magh Bihu in Assam, Uttarayan in Gujarat and Pongal in South India. 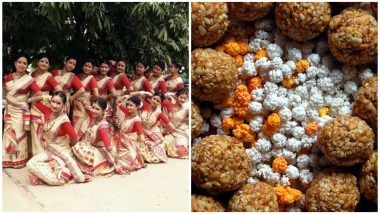 India is a land of diverse cultures and each corner has its own share of festivals. Many of these festivals are celebrated with a similar enthusiasm but has different traditions and rituals. The onset of summer is recognized widely across India. It is dedicated to express gratitude to the Sun God and welcome the harvest season. The festivals are observed during the second week of January every year to thank the nature for its plentiful resources and good crop. The festivities associated with the day is known by different names in different parts of the country - Makar Sankranti is celebrated in the Western parts, Lohri by North Indians and Sikhs, Magh Bihu in Assam, Uttarayan in Gujarat and Pongal in South India. The spirit is replete with decorating homes, preparing delicacies and flying kites.

Here’s a roundup of the festivities dedicated to the Sun God and see how it has been celebrated across the country in 2018.

Lohri in Punjab and North India

A bonfire is lit up at night with individuals throwing peanuts, popcorn, jaggery, and other things while walking around it. Women dress up in their traditional Punjabi attire, dance on the beats of Dhol and local folklore. People are seen making wishes as they toss the food items in fire hoping it will be fulfilled by the God of Fire. In Chandigarh, few schools organized functions to celebrate the festival with traditional songs and healthy competitions among children. Along with this, the Civic Body organized a cleanliness drive with nearly 800 workers and volunteers to celebrate Lohri 2018.

Assam’s celebration of Makar Sankranti is widely known as ‘Magh or Bhogali Bihu’ with feasts lasting for nearly a week. The festival is marked by delicious feasts and bonfires. People make bamboo huts called bhelaghor or mejis, or community kitchen and begin the preparations. However, with the beginning of New Year, the traditional pointed makeshift huts made of bamboo, leaves and thatch for Magh feasts saw new themes. They have replicated the likes of London’s Tower Bridge, Eiffel Tower, the India Gate or the Red Fort. Themes on burning issues concerning Assam such as saving the Rhino, river Brahmaputra, environment, recurring floods, were also taken up to raise awareness, reported state organisers.

Makar Sankranti is one of the most celebrated festivals across the country. It denotes the entry of the Sun into the zodiac sign of Makara (Capricorn) as it travels on its heavenly path. It is mostly celebrated in Western India. According to media reports, over 20 lakh devotees from across the country took a holy dip at the meeting of river Ganga and the Bay of Bengal on the occasion of Makar Sankranti 2018.

Uttarayan is the time between the Makara Sankranti and Karka Sankranti. One of the ways of celebrating this festival is flying Kites. The festival spans over a week but the International Kite Festival is observed in Ahmedabad for the past 28 years. As soon as the night falls, the sky lights up with hundreds of paper lanterns making it a beautiful view. This year as well, this sight has warmed up everyone’s soul. 44 countries have participated in the Kite Festival 2018.

Pongal is celebrated by Indians across the world, but especially in South India, it is a four-day festival during this month. Like every year, Tamilians were seen cooking special food to mark the festival. At Dharavi, one of the world’s largest slums in Mumbai, Tamil women gathered and were witnessed preparing traditional delicacies together.

Apart from celebrating in various ways; there is one common custom that is followed during this season. Everyone prepares a particular form of sticky sweet made of jaggery and sesame seeds. The delicacy is a sweet hint of a fresh start.

After a long week of celebrations, it gets little tedious to get back to work. Nevertheless, this is just the beginning of the massive festive season that awaits in the future. We enthusiastically wait for more amazing festivals to come.

(The above story first appeared on LatestLY on Jan 15, 2018 07:33 PM IST. For more news and updates on politics, world, sports, entertainment and lifestyle, log on to our website latestly.com).