A serpent deity is made of silver, stone or wood or a painting of snakes on the wall is worshipped. The statues are given a bath with milk. 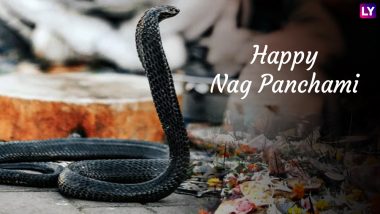 Nag Panchami or Naga Panchami is a traditional worship of snakes or serpents observed by Hindus throughout India and Nepal. Nag Panchami 2018 will be observed on August 15, coinciding with Independence Day. According to the Hindu calendar, the festival falls on the fifth day of the bright half of Lunar month of Shravana. The snakes are believed to reside in ‘Patala Loka’ and the lowest of them is known as 'Naga Loka', the region of the Nagas. On Nag Panchami, their blessings are sought for the well-being of the family. There are many stories related to worship of snakes. Below we discuss the history, significance, time, puja tithi and muharat.

Nag or Naga means snake and Panchami means the fifth day. The festival owes its origin to myriad legends and myths which can be traced back to the ancient Hindu Puranas. According to mythology, a deadly snake Kalia had been poisoning the river Yamuna and it had become difficult for the residents of Braj to drink water from the river. Lord Krishna, as a child avatar of Lord Vishnu, on the pretext of a ball falling in the river has a tussle with Kalia and eventually defeats him. Kalia takes away all the poison from the river and Krishna in return blesses him that on this day of Panchami whosoever will offer milk and prayers to the snakes, will get expiated of any hardships in times to come. Thus, the day was celebrated as Nag Panchami day.

Another myth that goes with the festivity is that during Samudra Manthan, Lord Shiva drank all the poison that came out from the churning of the sea. However, in the process few drops did fall on the ground and were drunk by snakes. Hindu devotees pray to snakes so that their families are spared of their wrath and poisonous bites.

Snakes have enjoyed a prime place in Hindu religion and Hindus have been worshipping snakes from times immemorial. Many Hindu gods are shown with serpents. Lord Vishnu sleeps on the king of snakes, Seshanag or Adisesha and Lord Shiva wears snakes as his ornaments. On this day, snakes are offered milk and rice to give protection to the family and the clan in totality. Across India and Nepal, Nag Panchami is celebrated in several ways.

Many devotees observe fast for the whole day to keep the snake god happy. Kheer is prepared as an offering while worshipping to snakes or snake idols. A serpent deity is made of silver, stone or wood or a painting of snakes on the wall is worshipped. The statues are given a bath with milk.  Some people fast one day before Nag Panchami which is known as Nag Chaturthi or Nagul Chavithi.

Although there are several serpent Gods, following 12 are worshipped during Nag Panchami puja. They are: Ananta, Vasuki, Shesha, Padma, Kambala, Karkotaka, Ashvatara, Dhritarashtra, Shankhapala, Kaliya, Takshaka and Pingala. Nag Panchami is observed in the month of Shravana, the advent of the rainy season in many parts of India. It is the time when snakes leave their holes in the flooded fields and jungles and enter the habitations of men – thereby throwing them into great consternation.

(The above story first appeared on LatestLY on Aug 14, 2018 03:31 PM IST. For more news and updates on politics, world, sports, entertainment and lifestyle, log on to our website latestly.com).