Naga Panchami or Nag Panchami is a traditional observance where snakes or serpents are worshipped. The day is observed on the fifth day of the bright half of the Hindu lunar month of Shravana. 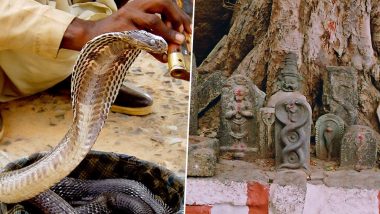 Naga Panchami or Nag Panchami is a traditional observance where snakes or serpents are worshipped. The day is observed on the fifth day of the bright half of the Hindu lunar month of Shravana. Nag Panchami day generally falls two days after Hariyali Teej. Panchami Tithi during Shravan month is considered highly auspicious to worship serpent Gods. Nag Panchami 2019 falls on August 5. The day is observed throughout India, Nepal and other countries with Hindu population. Hariyali Teej 2019 Date: Significance, Celebrations and Traditions Related to the Auspicious Sawan Festival.

Believers worship Nag Devta and offer milk to snakes. On the festival, women pray for the wellness of their brothers and family. In Hinduism, snakes are worshipped as Gods. Nag Panchami is one of those significant days and is observed on Shukla Paksha Panchami during Shravana month. According to the beliefs, puja that is offered to snakes reach the serpent Gods. Due to which people worship snakes as representative of serpent Gods. While there are several serpent Gods, names of twelve snakes which are worshipped include Ananta, Vasuki, Shesha, Padma, Kambala, Karkotaka, Ashvatara, Dhritarashtra, Shankhapala, Kaliya, Takshaka and Pingala. Hariyali Teej 2019 Decor Ideas: Floral Swings, Theme Parties and Game Ideas to Celebrate the Auspicious Day (Watch Videos)

Translation: May the snakes who are staying in this world, sky, heaven, sun-rays, lakes, wells, ponds etc. bless us and we all salute them.

On Nag Panchami, people offer prayers to the idols of the snake. They plaster the walls and doors of their houses with a sign of serpent milk. The statue is adorned with flowers, milk and sandalwood.

(The above story first appeared on LatestLY on Jul 31, 2019 07:30 PM IST. For more news and updates on politics, world, sports, entertainment and lifestyle, log on to our website latestly.com).