Shavuot Pronunciation: Know How to Say The Name of This Jewish Festival (Watch Video) 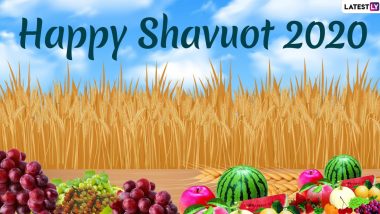 A Jewish holiday called Shavuot will be marked from tomorrow ie Ma 28, 2020. It is a two-day holiday that begins at the sundown of the fifth of Sivan month in Hebrew calendar and is celebrated with the nightfall of the sixth. The month of Sivan coincides with the months of May-June in the gregorian calendar. The word Shavuot means weeks. This festival is also known as the Feast of Weeks. For anyone who is not familiar with the culture, would find it difficult to pronounce the name. Even if you do, as you read, you wouldn't know if it is the right way to say it. Don't worry, as in this article, we tell you how to pronounce Shavuot. Shavuot 2020 Date And Significance: Know The Traditions, Customs And Celebrations Related to the Jewish Festival.

This festival has significance for two reasons- one it is a very important time for the harvest of wheat in the Land of Israel. The other is a spiritual reason, it commemorates the anniversary of the day when God gave the Torah to the nation of Israel at the Mount Sinai in Egypt. The observance of Shavuot is one of the three biblically based holidays. The date of Shavuot is linked to Passover. The Torah mandates a seven-week Counting of the Omer, beginning on the second day of Passover, to be immediately followed by Shavuot. Since it is not so popularly known holidays, we give you the exact pronunciation of the name. Shavuot 2020 Wishes & Chag Sameach HD Images: WhatsApp Stickers, Facebook Messages and GIFs to Send Feast of Weeks’ Greetings on the Jewish Holiday.

Watch Video of How to Say Shavout:

The observance of days of Shavuot also differs from community to community. In Israel, it is celebrated for a day. Conservative and Orthodox congregations in the diaspora observe it for two days. This festival is also called as "Festival of Reaping" and "Day of the First Fruits".

(The above story first appeared on LatestLY on May 27, 2020 05:56 PM IST. For more news and updates on politics, world, sports, entertainment and lifestyle, log on to our website latestly.com).