Shavuot 2020 Date And Significance: Know The Traditions, Customs And Celebrations Related to the Jewish Festival 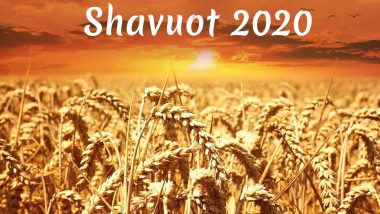 Shavuot is a Jewish holiday that occurs on the sixth day of the Hebrew month of Sivan. It generally falls between May 15 and June 14 in the Gregorian calendar. It is also known as Yiddish Shovues or as the 'Feast of Weeks' or Pentecost in English. The observance has both agriculture and spiritual significance for the Jews. It is the time of wheat harvest in Israel and is also believed to commemorate the anniversary of the day when God gave Torah to Israel at Mount Sinai. Shavuot is observed on the 6th to 7th of the Jewish month of Sivan. Shavuot 2020 begins on the evening of May 28 and ends in the evening of May 30. Shavuot 2020 Wishes & Chag Sameach HD Images: WhatsApp Stickers, Facebook Messages and GIFs to Send Feast of Weeks’ Greetings on the Jewish Holiday.

People wish each other on the festival saying “Chag Sameach!” Shavuot means “sevens” or “weeks,” hence it is called the festival is called the Feast of Weeks. It comes a month after Passover which celebrates the redemption of the Israelites from slavery in Egypt. Shavuot the festival that follows celebrates the receiving of Torah on Mount Sinai. Later in the year, Sukkot is celebrated which recalls the 40 years that the Israelites wandered through the wilderness on the way to the Promised Land. These three festivals depict their journey from slavery to redemption. Shavuot is part of the Shalosh Regalim or “three festivals”.

On Shavuot, people abstain from work, attend synagogue services, light candles and read the Torah. They read a liturgical poem called Akdamut, which signifies the greatness of God; the Book of Ruth as it highlights the woman’s choice to join the Jewish people and accept the Torah. They also read the Ten Commandments, in honour of the revelation of the Torah. As a customary practice, they study Torah all night called Tikkun Leil Shavuot. Traditionally, dairy products are eaten on Shavuot due to varying religious and traditional significances. Cheesecake, blintzes,  siete cielos (seven heavens) and kugels are prepared on this day. They also have a waster festival wherein they throw water balloons on each other. Both children and adults equally play the game.

(The above story first appeared on LatestLY on May 27, 2020 05:51 PM IST. For more news and updates on politics, world, sports, entertainment and lifestyle, log on to our website latestly.com).