US Independence Day 2020: Significance of Fourth of July Date, History & Importance of the Day That Marks the Declaration of Independence of the United States 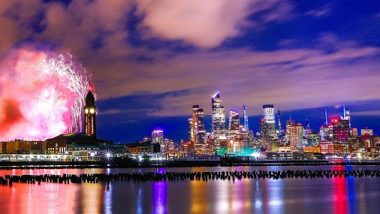 History of Fourth of July Date:

After voting for independence, Congress turned its attention to the Declaration of Independence, a statement explaining this decision, which had been prepared by a Committee of Five, with Thomas Jefferson as its principal author. Congress debated and revised the wording of the Declaration, finally approving it two days later on July 4.

As per history, several historians have long disputed whether members of Congress signed the Declaration of Independence on July 4. These questions surfaced even though Thomas Jefferson, John Adams, and Benjamin Franklin all later wrote that they had signed it on that day. Most historians have concluded that the Declaration was signed nearly a month after its adoption, on August 2, 1776, and not on July 4 as is commonly believed.

Significance of Fourth of July Date

Americans celebrate their Independence Day on the Fourth of July every year. They think of July 4, 1776, as a day that represents the Declaration of Independence and the birth of the United States of America as an independent nation. Americans celebrate this historic event with a lot of festivities. The country is lit with fireworks, parades, barbecues, carnivals, fairs, picnics, concerts and games. Family reunions take place, political speeches are held talking about the importance of independence, and ceremonies, in addition to various other public and private events.  We wish people of the US a very Happy Independence Day!

(The above story first appeared on LatestLY on Jul 02, 2020 06:00 PM IST. For more news and updates on politics, world, sports, entertainment and lifestyle, log on to our website latestly.com).