The purported sex education video was widely circulated on social media, with netizens calling it ‘cringe and confusing.’ Activists and sexual education experts have heavily criticized the federal government’s campaign and deemed it as misinformation about sexual consent. 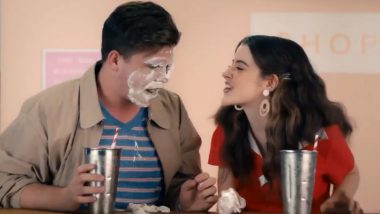 The government released the campaign on The Good Society that consists of 350 videos, podcasts, digital stories and more to help teach sex and consent to school-age children. According to reports, the website is a part of the Australian Government’s Respect Matters program to teach respectful relationships in schools. The video shows a teenage girl smearing a milkshake on her boyfriend’s face without his permission. The clip then uses other examples of eating pizza and touching private parts as situations where permission would be required. 'World Longest Penis' in a Kids Cartoon! Danish Show John Dillermand Aimed at 'Sex Education' Gets Mixed Reactions.

This is the government's new video to educate teenagers on consent... and honestly, I think I actually know less about the issue after watching this. What's going on?

The Good Society’s website describes the learning material as an engaging online program that helps “students develop safe, healthy and respectful relationships.” The video did not go well with the netizens, who slammed the creators. Activists and sex education experts criticized the material for being out of touch with modern teenagers by using references. iConsent, Danish Sexual Consent App Allows Lovers ‘One Sex Session Valid for 24 Hours.'

what if we asked boys to think about consent without using object metaphors and instead to think about girls and women as people? not milkshakes, not cups of tea, not unlocked cars, just like, people

Netizens Are Baffled at How it Was Even Passed

So baffled by how this even got past the idea stage! Who approved this and why are they allowed to approve things?

Following the criticisms online, officials reportedly removed the milkshake video and another clip in which a girl wonders whether to swim with sharks. The Guardian further revealed that the government spent nearly half the $7.8 million allocated to its ‘Respect Matters’ campaign.

(The above story first appeared on LatestLY on Apr 22, 2021 12:25 PM IST. For more news and updates on politics, world, sports, entertainment and lifestyle, log on to our website latestly.com).