Bigg Boss 14 Is Here! Funny Memes and Jokes About Salman Khan's Drama-Filled Reality TV Show Have Taken Over Twitter; Check Out the Best Ones

Get ready for the 14th drama-filled TV reality show, Bigg Boss. Salman Khan's is returning with Bigg Boss 14 on October 3 and Twitter can't keep calm. Funny memes and jokes about the Bigg Boss 14 have taken over Twitter and we cannot stop laughing. 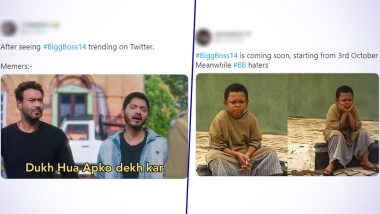 Get ready for the 14th season of the drama-filled TV reality show, Bigg Boss. Salman Khan's is returning with Bigg Boss 14 on October 3 and Twitter can't keep calm. Funny memes and jokes about the Bigg Boss 14 have taken over Twitter and seriously, our Monday is made! BB has been one of the few reality TV shows that people criticise and love equally. You hear yourself saying that you want to stop watching the show, at one moment, and at the very second moment, you find yourself binge-watching the viral videos from Bigg Boss. The show is a haven for funny memes and jokes. Right from Dolly Bindra's loud arguments to "Pooja, what is this behaviour?!", we have found some the gems of the meme world from the show.

So, we don't know about the fans but memers are pretty excited about Bigg Boss 14 and cannot wait for more content. In fact, the announcement itself has turned into a green flag to the meme makers. Twitter is filled with some of the most hilarious posts and reactions to TV channel Colors' premiere date announcement of the upcoming season on its official Twitter and Instagram pages. They wrote: “2020 ki har problem ko chaknachoor karne aa gaya hai #BiggBoss! #BB14 Grand Premiere, 3rd Oct, Saturday raat 9 baje, sirf #Colors par. Catch #BiggBoss2020 before TV on @vootselect". Well, amid the pandemic this meme flood on Twitter is only making us happier, check out the best Bigg Boss 14 memes and jokes on Twitter:

There Has To be a Hera Pheri Meme

*Me to my friends :- pic.twitter.com/f3kMvQC6gE

The makers also shared a video of Salman Khan announcing the premiere date of the reality show, the first promo of which was released last month. It was shot at the 54-year-old actor's Panvel farmhouse during the coronavirus-induced lockdown. While we are yet to know about the new season's theme and contestants, we can surely expect some of the funniest memes and joke.

(The above story first appeared on LatestLY on Sep 14, 2020 04:54 PM IST. For more news and updates on politics, world, sports, entertainment and lifestyle, log on to our website latestly.com).