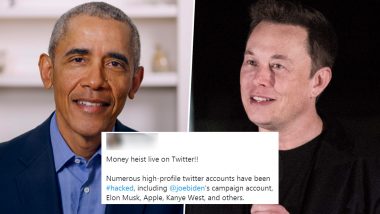 Twitter accounts of popular individuals and major companies like Bill Gates, Elon Musk, Michael Bloomberg and Apple among others appeared to have been hacked or ended up in a crypto-related scam. The hacker used these accounts to promote a bitcoin scam. The verified accounts of former US President Barack Obama, Joe Biden, Kanye West, Kim Kardashian West, Warren Buffet and Jeff Bezos also appeared to have been compromised in the cryptocurrency scam. As the news went viral, people took to Twitter comparing it to the happenings in Netflix series, Money Heist. While Twitter is investigating the matter, people think it is not just a matter and are referring to it as Twitter Heist. Twitter Accounts Hacked: CEO Jack Dorsey Says 'We All Feel Terrible This Happened' After Major US Twitter Accounts Hacked in Bitcoin Scam.

Following the incident, Twitter said that it has taken a drastic step of blocking new tweets from every verified user, even if it is not compromised, as well as locking all compromised accounts. Twitter tweeted saying, We have locked accounts that were compromised and will restore access to the original account owner only when we are certain we can do so securely.

Twitterati Believe It's a Heist:

Kanye west, Jeff Bezos, Bill Gates and Elon Musk Twitter accounts got hacked and this guys have made over 10M dollars

This will go down as the biggest heist on Twitter pic.twitter.com/q7mUXYzpt0

One of the biggest heist in day light when whole world was watching...

Better than all seasons of money heist 😐pic.twitter.com/a2Sv7JO5nA

The Greatest Heist Just Went Down. 20Billion In BTC All From Hacked Twitter Accounts.

If @Twitter accounts with Blue Checks can get #hacked this easily, think how vulnerable voting machines and voter registration systems still are. Or maybe this Bitcoin scammers heist was meant to advance a narrative ahead of mail voting debate in the US. @RobertAlai

Money Heist season 5 brought to you by Twitter #Hacked pic.twitter.com/OQchwEEbR1

The tweets posted from Gates and Musk's account after hacking stated a Bitcoin wallet address and promised to send back double the amount of BTC if a user sent a certain amount to the designated wallet first. Firstly, the scammers posted a set of tweets, deleted it and then for the second time from both Gates’ and Musk’s accounts.

The second tweet from Musk's account reads, "You know I living giving back to my community. I’m doubling all BTC payments sent to my address. You send $1,000 and I will send #$2,000 back! Tell your family & friends! Only going on for 30 minutes. (sic)"

Meanwhile, people took to Twitter questioning the poor security features of Twitter that even accounts of world-famous people and popular brands were hacked all, at once. Twitterati is asking the micro-blogging platform for strong security features.

(The above story first appeared on LatestLY on Jul 16, 2020 10:55 AM IST. For more news and updates on politics, world, sports, entertainment and lifestyle, log on to our website latestly.com).