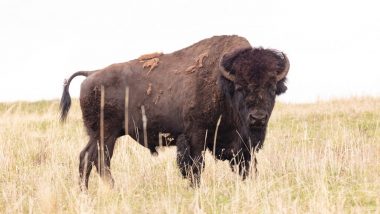 A 72-year-old Californian woman was gored by a bison at Yellowstone National Park when she approached the wild animal to click a photo. The park said that the incident took place on June 25 at the woman’s campsite near Yellowstone Lake. It is said that she got within 10 feet of the bison multiple times causing "multiple goring wounds". She was taken to a helicopter at the Eastern Idaho Region Medical Center but they could not save her lives. The identity of the woman has not been revealed by the park authorities. Tigress Killed in Fierce Fight With Herd of Bison in Jharkhand's Palamu Tiger Reserve.

In a Facebook post by Yellowstone National Park, their Senior Bison Biologist Chris Geremia said, "The series of events that led to the goring suggest the bison was threatened by being repeatedly approached to within 10 feet." She added, "Bison are wild animals that respond to threats by displaying aggressive behaviors like pawing the ground, snorting, bobbing their head, bellowing, and raising their tail. If that doesn’t make the threat (in this instance it was a person) move away, a threatened bison may charge. To be safe around bison, stay at least 25 yards away, move away if they approach, and run away or find cover if they charge."

This is not the first time, bison injured a guest after the park reopened following COVID-19 lockdown. Two days after opening, a visitor was injured by a bison as the wild animal came too close. The woman who got within 25 yards of the animal was reportedly “knocked to the ground and injured” by the bison in the Old Faithful Upper Geyser Basin.

(The above story first appeared on LatestLY on Jul 01, 2020 02:13 PM IST. For more news and updates on politics, world, sports, entertainment and lifestyle, log on to our website latestly.com).