'Check Your Privilege Challenge' Goes Viral on TikTok; Netizens Bring out the Grim Reality of Discrimination Against the Black Community Using 'Put a Finger Down' Questionaire Amid George Floyd Death Protests

On TikTok, people are doing the "Check Your Privilege challenge" that includes answering several questions that bring out the difference between lives led by black and white people. The challenge aims to make people understand what is "white privilege" via a set of simple yet powerful questions that shows the different ways both white and black people are treated. 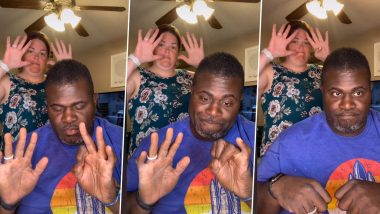 The United States streets have been taken over by enraged protestors fighting for justice after George Floyd was killed while being taken in custody in Minneapolis, Minnesota, the United States by Derek Chauvin, a white American police officer. While on-road protests are one way to go, different sets of people are choosing to spread awareness about racial discrimination in different ways. The support for Black Lives Matter campaigns have intensified and more people are talking about white privilege that is the root cause of racism against the blacks and also police brutality against them. On TikTok, people doing the "Check Your Privilege challenge" that includes answering several questions that bring out the difference between lives led by black and white people. George Floyd Death: What is Second-Degree Murder? How is it Different From First And Third-Degree Murder? Know About The Charge on Former Officer Derek Chauvin.

The challenge aims to make people understand what is "white privilege" via a set of simple yet powerful questions that shows the different ways both white and black people are treated. Typically a duo of black and white people take this challenge and play a series of question that is pre-recorded in the TikTok sound list. Both of them have put a finger down if any of the circumstances mentioned in the series of question has happened to them. George Floyd Killing: Charges Against Former Officer Derek Chauvin Raised to 2nd-Degree Murder.

Most of these videos show blacks having faced discrimination in their normal daily lives because of their black skin colour whereas whites getting away with it. The questions surround instances people have faced discrimination in. For example, being denied service on account of your race or feeling "fear in your heart" when being stopped by police or having someone cross the street to avoid passing you. Who Was George Floyd? Why Was He Detained? Here's Why the Death of the 46-Year-Old African-American in Minneapolis Sparked Violent Protests in US.

In most of the videos, you'll see that the black person has experienced all the instances like being seen as a threat or detained by police officers for no reason whereas the white person hasn't experienced any of it.

(The above story first appeared on LatestLY on Jun 06, 2020 09:21 PM IST. For more news and updates on politics, world, sports, entertainment and lifestyle, log on to our website latestly.com).