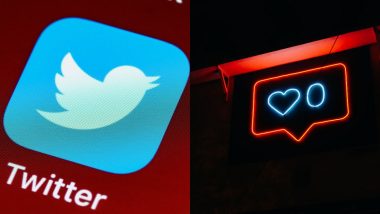 We all know about Twitter's feature where we can click on the 'heart' button to like something we see on the micro-blogging site. But Twitter users have something to say about double tapping on the like button. Users have taken to Twitter writing that double-tapping on the like button can give two likes and not just one. While some say that 'it will reduce someone else's like or add two likes'. 'This Claim is Disputed' Funny Memes and Jokes Are Latest Twitter Trend, But What Does it Mean?

A tweet reads, "Y'all, I've been constantly playing this twitter like button. You can actually double-tap the heart and it gives you two likes at a time Loudly crying face." Another tweet reads, "If you double-tap the like button really fast it gives you two likes instead of one." Another user wrote, "Double-tap on the heart and then tap again and it adds two likes."

Does Double Tap Give 2 Likes?

double tap as fast as you can! ill let you two fill up my notifications with double likes. i need the game

Quite a Lot of Users Believe the Claim

However, not everyone believes the same and said that Twitter has not rolled out any such feature. But many refused to believe and said that if they double tap on the heart button, it actually works for them and gives two likes. In reality, Twitter has not rolled out any such feature on the platform. It is simply one like from another account at the same time that the users think is due to their double-tap on the post. Many such tweets are being written on social media where users say it is possible indeed. People have also taken to the platform saying that even tried to unlike which reduced two likes on the post, which is also just a claim and it is not possible.

(The above story first appeared on LatestLY on Dec 13, 2020 01:09 PM IST. For more news and updates on politics, world, sports, entertainment and lifestyle, log on to our website latestly.com).