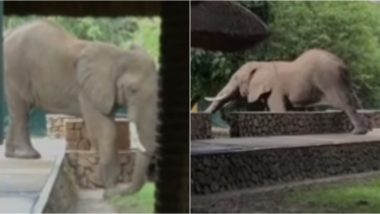 An elephant at a national park in Zambia left social media users laughing at it was seen stealing mangoes. The jumbo walked over a five-foot wall to get the fruits. Video of the cute crime has now gone viral on social media platforms making netizens laugh. The incident happened at South Luangwa National Park on Saturday where the adult male elephant paid an unexpected visit. General manager Ian Salisbury saw the bull elephant jumping over with precision, all just for mangoes. Watching the video you may think that the jumbo may not fit in properly and just fall off, but it doesn't. The giant animal manages to fit in quite well and does its business, but it did not go as planned. Elephant Climbs Tree to Pluck Jackfruit, Smashes and Gobbles It Up, Watch Video.

Andy Hogg, managing director of The Bushcamp Company who recorded the incident said that the animal couldn't pluck the mangoes. The animal turned out to be a little unlucky as it was not the season for mangoes then. Ian, from originally from Bacup, Lancs was quoted as saying, "He just chose the most direct route and made himself right at home. The guests were very amused at the idea of a climbing elephant. They were in amazement that it would bother to climb over such a high wall. They were out on a safari drive in the National Park at the time, so were sorry to have missed seeing it (in person)." Elephant With Traffic Sense! Video of Jumbo Waiting For Vehicles to Pass on Busy Road Amuses Netizens.

The lodge has a central foyer area which attracts herds of elephants in the early winter. Ian said that the elephant was hungry and was looking for some wild mangoes but turned out to be unlucky. He added, "His easiest way of getting there was to climb over this high wall. It's really unusual behaviour for an elephant to climb so high."

(The above story first appeared on LatestLY on Jan 14, 2020 03:56 PM IST. For more news and updates on politics, world, sports, entertainment and lifestyle, log on to our website latestly.com).