Student and web developer Louan Bengmah, uses two random emojis from Twitter and mixes up their elements, through his creation Emoji Mashup Bot. The bizarre combinations make zero sense, but people online sure had a field day. 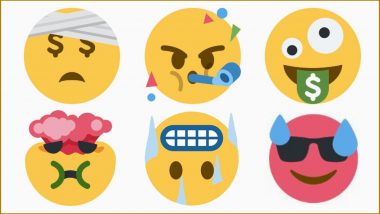 Emojis have made communications so better. Don’t you agree? You have all the moods set right on online messaging apps that you can exchange instead of regular texts. Today, Emojis are the language of social media. Understanding its demand among users, WhatsApp, Facebook, Instagram, Hike and many applications keep adding more fun expressions to the already existing emoticons. But have you ever imagined, how mixing up two different expressions can lead up to? Student and developer Louan Bengmah, did. The creator uses two random emojis from Twitter and mixes up their elements, through his creation Emoji Mashup Bot. The bizarre combinations make zero sense, but people online sure had a field day. Are You Using Them Right? Most Commonly Misunderstood Emojis Explained.

Louan Bengmah, is an 18-year-old student and a web developer from Nantes, France created the Emoji Mashup Bot. The account tweets a new emoji fusion every year. It brings two emojis together and combines them to create a new one. Yes, we say it again, the creation does not make much sense, but it is a fun and an awesome way to keep the Tweeple engaged. Period Emoji Offends People: 5 Emojis that are ACTUALLY Offensive but No One Gives a S**t About.

This is the Best So Far

The Emoji Mashup Bot is clearly a success on Twitter. The concoctions earn thousands of likes and retweets from many strong followers, the Twitter account @EmojiMashupBot has accrued in just a few weeks. It is surely creative and we hope to see these mashups on our online messengers soon.

(The above story first appeared on LatestLY on Jul 24, 2019 07:29 PM IST. For more news and updates on politics, world, sports, entertainment and lifestyle, log on to our website latestly.com).