Does Gulab Jamun even originally belong to Pakistan? 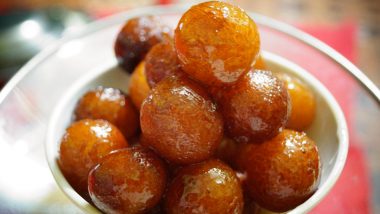 2019 begins with a piece of sweet news from Pakistan. So everyone's favourite gulab jamun is now the national sweet of Pakistan. Yes! The official Twitter account of Government of Pakistan posted a poll on Twitter that asked the people of the country, "What is the National Sweet of Pakistan?" and Gulab Jamun won 47 per cent of the votes followed by Jalebi that got 34 per cent vote and then there was Barfi that received 19 per cent of votes. The election was made on Twitter, and we saw that Gulab Jamun won unbiasedly. Dog in Pakistan Wrapped in PTI Flag, Shot Dead; Ghastly Video Going Viral.

What is the National Sweet of Pakistan?

However, the reaction to this sweet election was huge. Some welcomed the results, and some took it with a pinch of salt. Various questions were raised on Gulab Jamun's win. Some called is a biased win because it was pitted against only two other competitors- jalebi and barfi. The famous Karachi Halwa, Sheer Khurma, Lab e Shireen etc. were excluded.

Moreover, some wondered why the elections only happened on Twitter and not on other social media platforms. And one of the obvious questions raised was, "Is Gulab Jamun entirely from Pakistan?" While there is no authentic source to cite where Gulab jamuns originated first but it is said that Central Asian Turkic invaders brought to India.

I think Ladoo and kheer should be added to this list

What type of a poll is this coming from *Government of Pakistan, man. 😳

Where's the Halwa at?

We are still wondering if we can safely call gulab jamun the national sweet of Pakistan. What are your suggestions? Let us know in the comments section below!

(The above story first appeared on LatestLY on Jan 08, 2019 02:27 PM IST. For more news and updates on politics, world, sports, entertainment and lifestyle, log on to our website latestly.com).