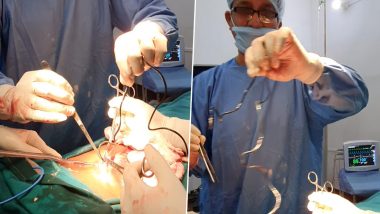 Guwahati, June 5: A rare case was reported at a hospital in Assam's Guwahati where a man admitted for abdominal pain was found with mobile battery charger in his urinary bladder. One can guess the entry point of charger, said surgeon Wallie Islam as revealed details related to the case on social media. The patient is on the path to recovery after a successful operation, the doctor said.

"A 30 year old man came to me with complaints of pain abdomen and history of accidental ingestion of headphones. I operated upon him to find nothing in his gastrointestinal tract," Islam said on his Facebook account. Thane Man Allegedly Shoots Himself in Head Assuming Gun To Be Fake During Neighbourhood Party, Dies.

The doctor, while speaking to a news channel, said that an X-ray was subsequently conducted after the problem was found not to be linked to the gastrointestinal tract. The X-ray revealed that a mobile battery charger had entered inside the urinary bladder.

"All of you must have guessed the entry point and route ( it entered through his penile urethra to his urinary bladder)...his mental health remains a question....surgery was successful and the patient is recovering....everything is possible on this earth, indeed! (sic)," the doctor wrote.

(The above story first appeared on LatestLY on Jun 05, 2020 10:31 PM IST. For more news and updates on politics, world, sports, entertainment and lifestyle, log on to our website latestly.com).