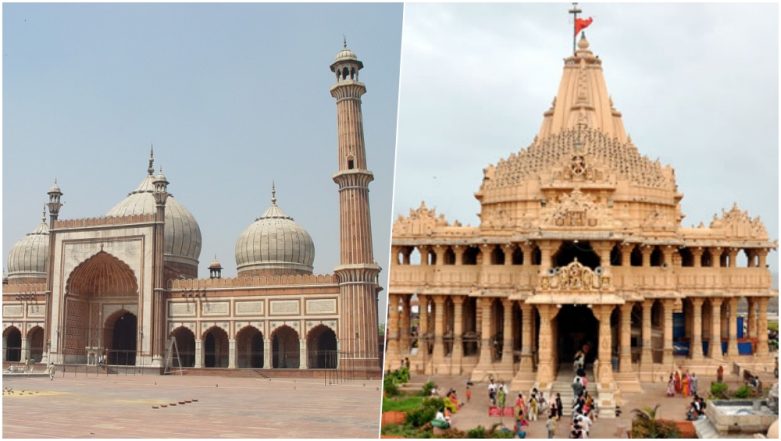 Mosque helps in bhandara of Shiv Mandir in UP (Photo Credits: Pixabay and Wikimedia Commons)

A striking example of communal harmony was on display at Meerut when a mosque in Uttar Pradesh hosted a Shiv Bhandara. It was the foundation day of Somnath Shiv Mandir located in Mohalla Chahsor. The premises Jama Masjid in the Kotwali area were used to prepare food. The Muslims joined along to prepare the food for the auspicious day and also distributed it among the people. Kerala Temple Allows Muslims to Pray Namaz For Bakra Eid as Mosques Are Still Covered in Water.

As per the reports in Hindustan Times, the Jama Masjid was opened early in the morning. Raw food, stove and vegetables were brought in the premises and the bhandara food was prepared here. The water used by the Muslims to wash their feet before they go ahead to pray was used to wash the vegetables. Drinking water was also provided. The Muslims here joined along to help in making the food and also distributed it among the devotees who had gathered for the occasion. Communal Harmony Wins Over Violence in Assam's Hailakandi: Muslim Man Helps Hindu Neighbour's Pregnant Wife Reach Hospital on Time Amidst Curfew.

The chief city cleric or Sheher Kazi of the Jama Masjid, Zain-us-Sajideen, had assured help to the local Hindu community in providing space for the event. The Somnath temple is about 150 years old and has idols of Ganesha, Shiv Durga, Hanuman Annapurna. It is a lovely example that once again puts communal harmony in the display. A few days ago the Shri Sita Ram temple organised Iftar in its premises. People from the Hindu and Muslim communities sat together to relish the delicious food prepared in the holy month of Ramzan.

At a time when some others try to create a divide between the communities and play religious politics, it is instances like these that prove harmony wins overall. It sends a lovely message to everyone.