HORRIFYING! Elephant Killed by Tamil Nadu Resort Workers Who Threw Burning Tyre at It, Shocking Video Shows the Brutal Act by Humans Against the Animal

A wild elephant, which strayed into human habitat in Masinagudi, Nilgiris district of Tamil Nadu, was killed by private resort workers who hurled burning tyres at the animal. A shocking video is going viral on the internet that shows the brutal act by humans. 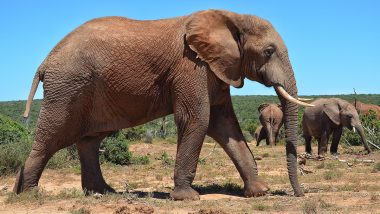 It is absolutely appalling to see humanity to the new low. Animals are as much a part of this planet as humans. But there have been shocking cases which revealed that people did not even consider them to be living beings. Last year, a pregnant elephant was fed pineapple filled with crackers in Kerala. Both the mother and the baby died. Yet again, another monstrous act of humans came into the light. A wild elephant, which strayed into human habitat in Masinagudi, Nilgiris district of Tamil Nadu, was killed by private resort workers who hurled burning tyres at the animal. A shocking video is going viral on the internet that shows the brutal act by humans.

There have been many unfortunate instances of animal cruelty. Every time, people call out such a monstrous act, another even more horrifying act come forward. Earlier this month, someone brutally carved ‘Trump’ on a manatee’s back in the headwaters of Florida’s Homosassa River. The recent incident states that the elephant was aged around 40 years, and he sustained serious burn injuries to its ears.

According to reports, the male elephant was found in a very serious condition with ear injuries. It died while the forest officials were transporting it to a different facility for treatment. Subsequent injuries revealed that the animal suffered fatal injuries because of the burns. A graphic video going viral on the internet shows the cruel act of humans against the elephant. The tyre of flames was hurled from a building on the animal, injuring its ear. The animal fled, trumpeting in pain.

Case of animal cruelty comes to light in Masinagudi, Nilgiris. People in a private resort apparently threw a lit, burnt cloth on a 40-year-old elephant following which the animal died.

On the basis of the video evidence, forest officials detained two persons at the resort, including the owner of the resort, for the crime. It was during the investigation, a video was found in their phones which revealed how the animal was tortured by the men who threw burning tyres at it.

(The above story first appeared on LatestLY on Jan 22, 2021 08:43 PM IST. For more news and updates on politics, world, sports, entertainment and lifestyle, log on to our website latestly.com).