HORRIFYING! Pregnant Elephant's Death After Being Fed Pineapple Filled With Crackers In Kerala Is New Low For Humanity, Furious Netizens Demand Justice For The 'Mother and Baby' 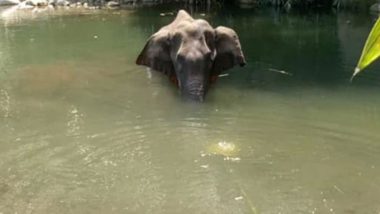 In a horrific incident, a man fed a pregnant elephant with pineapple in Malappuram district of Kerala. The fruit exploded in her mouth injuring her jaw which led to her death. The incident came to light after a forest officer took to social media to share the details. The terrible animal abuse has angered Twitterati who have taken to social media platforms demanding action against the culprits. Here's how people reacted to the incident on social media platforms. Horrific Animal Abuse! Pregnant Elephant Dies After Being Fed Pineapple Filled With Firecrackers in Kerala's Malappuram District.

The wild elephant had left the forests of the Silent Valley into a nearby village in search of food when she fed firecracker-laden fruit. After her jaw injured she talked through the village enduring the pain and finally died. Forest officer Mohan Krishnan, who was part of the Rapid Response Team to rescue the elephant, wrote on Facebook in an emotional post writing, "She trusted everyone. When the pineapple she ate exploded, she must have been shocked not thinking about herself, but about the child, she was going to give birth to in 18 to 20 months." Elephants Carry Dead Body of Calf in Indian Forest, 'Funeral Procession' of Mourning Elephants Go Viral (Watch Video).

This is CRUELTY! Heartbreaking 💔

As a human I am really sorry !

When Shall we Learn Co-existing?

WORLD IS FOR EVERYONE INCLUDING ANIMALS. WHEN WILL SOME PEOPLE UNDERSTAND THIS.

Culprits Need to be Behind the Bars!

#Elephant We strongly demand arrest of the people involved as soon as possible.@TheKeralaPolice

Immediate Action Must be Taken:

I was really heartbroken when i came to hear about the news of the elephant. Such atrocious acts should be strictly punished. I hope @CMOKerala will take necessary actions.

When Cruelty Takes The Form of Humans:

Humanity?? We don't talk about it 😔

Such a Horrible Thing to Do!

The pregnant #Elephant fed crackers by human beings makes my belief stronger that we human are the biggest devil on earth. hope the perpetrators of the 2 murders are caught and the mother and child is served justice. At times I wonder where do people get such horrible ideas from?

They said it's God's own country but God won't forgive you for this disgusting act. #Elephant pic.twitter.com/94nh9Kyo86

People also shared animations and cartoons depicting the incident and the goodness of the elephant.

That's why we are facing several disasters again and again.

As a human I am sorry #Elephant 🐘

It further reads, "She didn't harm a single human being even when she ran in searing pain in the streets of the village. She didn't crush a single home. This is why I said, she is full of goodness." The photo which is being widely shared on social media shows the elephant standing in w river. Reportedly, she walked up to the Velliyar River and stood there holding water in her mouth, probably for a little relief from the pain. Forest officers said that maybe the elephant did it to avoid flies and other insects on her injuries.

Trying to bring out of the river, the forest officials brought two captive elephants, called Surendran and Neelakanthan, to lead her out of the river. Mentioning it, Mohan Krishnan writes, "But I think she had a sixth sense. She didn't let us do anything." After hours of trying to rescue the elephant, she passed away on May 27 at 4 pm in the water. Officials then took the elephant in a truck and cremated her.

(The above story first appeared on LatestLY on Jun 03, 2020 01:34 PM IST. For more news and updates on politics, world, sports, entertainment and lifestyle, log on to our website latestly.com).