How Much Green Is Too Much Green? Turkey Sandwich Filled With Extra Spinach Divides the Internet (View Pic) 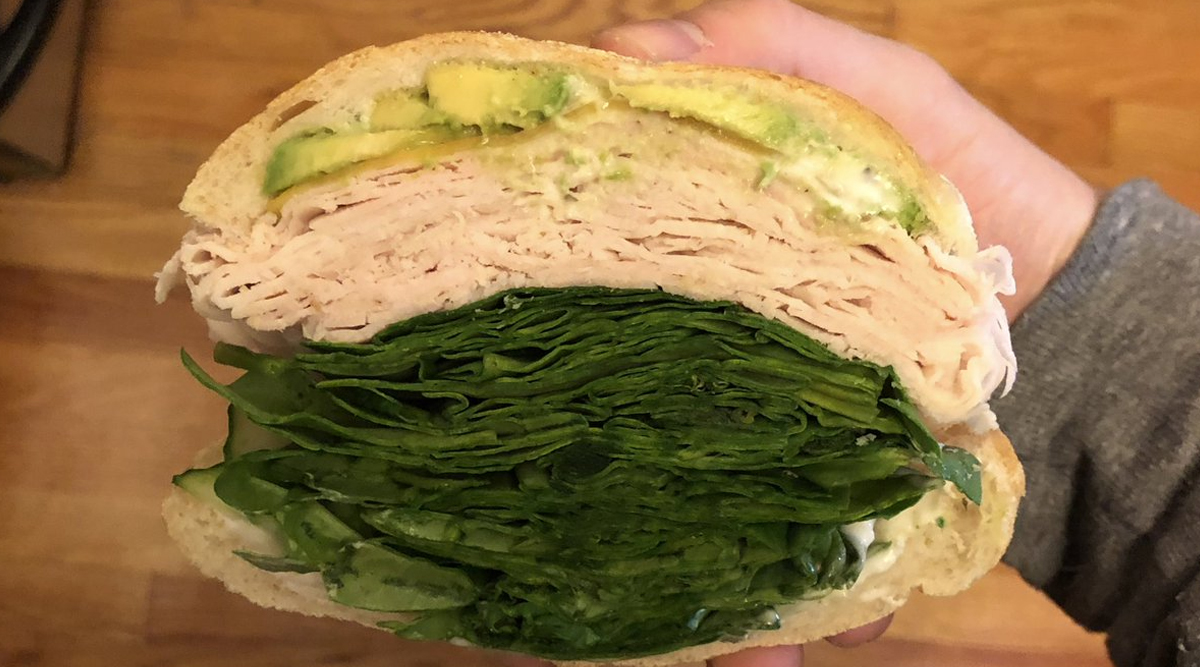 How much green is too much green? There are a plethora of opinions on this. A hot dog can be a sandwich, a cup of yoghurt is soup, and a bowl of pasta is a salad. Depending on who you ask, all food is categorised as either salad or sandwich or just soup. For Sandwich lovers like this Twitter user Josh Gondelman, the definition of the green sandwich has reached on some other level. His sandwich is also a salad as the amount of green between the breads is extreme. After he shared the picture of his turkey sandwich filled with extra spinach, the internet was left puzzled and so divided. The image of his meal has gone viral, leaving social media users totally in splits. Oranges in Maggi Noodles? Picture of This Weird Food Combination is Wanting Netizens to Throw Up in Disgust!

Gondelman took to Twitter sharing a photo of the turkey sandwich he ordered. His meal had an equal amount of spinach and turkey and bread. Yes, it was giant enough for one man. “I don’t know what message she’s trying to send, but the lady at my bodega snuck an entire salad into my turkey sandwich,” he captioned the image on the social media platform. Man Arrested For Eating Sandwich on San Francisco Train Platform by California Police!

Here's the Pic of His Turkey Sandwich:

I don’t know what message she’s trying to send, but the lady at my bodega snuck an entire salad into my turkey sandwich. pic.twitter.com/g8tYMI4Gkp

At the time of writing this, his tweet garnered more than 87K likes and thousands of comments surely. Gondelman, in a follow-up tweet, revealed that he took out the extra spinach from his sandwich and ate it as a salad with a fork.

Muna I pulled out the spinach and ate it like a fully separate salad with a fork!

His tweet unintentionally launched Twitter into a hilarious debate over what is the right amount of spinach on a sandwich. Food enthusiasts were quick to respond.

😂 what a treat , I can totally picture it. pic.twitter.com/aOLI5Mb02U

I would have pulled out the spinach and used it to make Knorr’s vegetable spinach dip. 👍🏻

It's a message alright... pic.twitter.com/pcD4IKINIA

We are sure that it is rare to see this amount of spinach being stuffed on a sandwich. Besides, it was smart for Gondelman that he took out the greens and decided to eat as a salad. Otherwise, it would have been quite a task to finish the food if you followed the usual pattern of eating a sandwich. The chef was in no mood to be a miser, when it came to feeding the hungry customer.