JCB Ki Khudai Funny Memes and Jokes on Viral JCB Videos: 13 #JCBKiKhudayi Tweets That Will Make You Laugh Out Loud

So, with so much going on, we bring you the best (we think) and most hilarious tweets and memes on JCB Ki Khudayi! 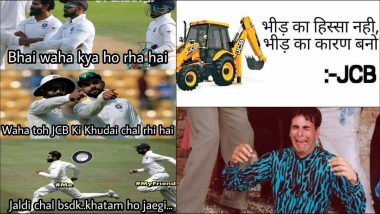 Internet right now is– ‘JCB Ki Khudai’ memes and memes all around! Netizens are enjoying anything, and everything related to JCB. Such is the level of craze for J.C. Bamford Excavators Limited, universally known as JCB that we Indians apparently spend hours watching JCB excavators work. There are many JCB videos that have garnered over four million views on YouTube. Now, this hilarious madness led to a hashtag, #JCBKiKhudayi trend on Twitter with internet janta posting funny ‘JCB Ki Khudai’ memes to take potshots at those who love watching JCB excavators digging up the dirt. Funny JCB Ki Khudai Memes Flood Twitter but Why Is #JCBKiKhudayi Video Going Viral and Trending in India?

For the uninitiated, JCB is a multination corporation that builds manufacturing equipment for construction, agriculture, waste handling and demolition. However, it’s much more than that for people in India. People love to watch JCB machines digging up roads or at a construction site in person. If they are unable to watch it in real time, they make sure to watch it online. Not kidding, there are many, many YouTube videos related to JCB that have fetched views in millions. Crazy, isn’t it? Is Sunny Leone's Career Change Plan the Reason Behind Viral 'JCB Ki Khudayi' Memes? Check Out This Tweet!

1. Such a Life Quote

4. Woman, It's Not OTHER WOMEN

She- he must be thinking about other women

#jcbkikhudayi When you come to know that JCB is far more reliable than RCB pic.twitter.com/KwVEmT5RhO

If I was a JCB driver

Old people on Twitter trying to make sense of the #JCBkiKhudayi trend & trying to keep up pic.twitter.com/VpCbxyB31k

When you hear JCB sound in your area :#jcbkikhudayi pic.twitter.com/0nAP2NcxO5

So, with so much going on, we bring you the best (we think) and most hilarious tweets and memes on JCB Ki Khudayi! If you have more to share, please feel to do so. And to all those who underestimated the power of a crowd doing something meaningless, they should hush up now.

(The above story first appeared on LatestLY on May 28, 2019 01:58 PM IST. For more news and updates on politics, world, sports, entertainment and lifestyle, log on to our website latestly.com).