Man Proposes to Girlfriend by Singing and Dancing On Top Of His Van, Watch Video of His Bae Reacting to The Sweet Surprise

Video of a wedding proposal has gone viral on social media platforms for all the right reasons. Surprising his partner Mike Ogden proposed to Gaynor Marshall by singing and dancing while standing on top of a Tesco store. 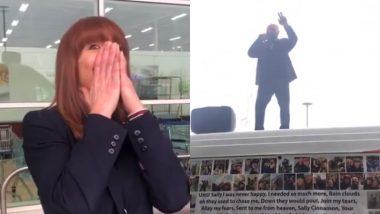 Video of a wedding proposal has gone viral on social media platforms for all the right reasons. Surprising his partner Mike Ogden proposed to Gaynor Marshall by singing and dancing while standing on top of a Tesco store. He sang Stone Roes song Sally Cinnamon from the top of his Ford Transit. The man was dressed in a tuxedo and had a karaoke speaker in hand. After the song and dance, he jumped down and got on his knee. Hawaii Man Proposes to Girlfriend While Surfing And Ends Up Dropping Ring in the Ocean, But There's a Sweet TWIST! (See Pictures)

Handing over a bouquet of flowers Gaynor can be heard saying, "You are my world. You would make me the happiest man in the world if you’d be my wife forever. ‘Will you marry me?" A teary Gaynor replies saying, "You know I will." After seeing Mike singing, Gaynor's colleagues brought her out of the office. They clearly knew of Mike's plan to surprise his girlfriend. In between she says, he is 'off his head'. World's Most Unique Wedding Proposal? Japanese Man Travels 6 Months to Spell 'Marry Me' on Google Earth, Watch Viral Video.

Watch Man Proposing To Girlfriend From Top of Tesco Store:

Mike said that he wanted a memorable proposal as they always talked about keeping the wedding a low-key affair. He said, "We spoke about if we get married, it would just be us two on a beach somewhere, no fuss. So I thought if that's going to be the wedding. I'll have to make the proposal a big event. ‘I thought, why don't I sing it from the top of my van? Then my friend who is a DJ offered to lend me a speaker." Mike said that he has been rehearsing for two weeks and also gave her a collection of their photographs.

Meanwhile, Gaynor had no idea what her partner was upto. She said, "A couple of girls in work knew what was going on and they stitched me up. They pulled me away from the desk and then said there was a problem outside I needed to sort out. I got out and saw Mike was standing there on top of his van and I was gobsmacked. The fact it was that song was extra special because that's our song, it means quite a lot to us. There was no chance I was going to say no, I've never been happier. He's been my rock and I'd be lost without him."

(The above story first appeared on LatestLY on Dec 02, 2019 02:36 PM IST. For more news and updates on politics, world, sports, entertainment and lifestyle, log on to our website latestly.com).