Hawaii Man Proposes to Girlfriend While Surfing And Ends Up Dropping Ring in the Ocean, But There's a Sweet TWIST! (See Pictures) 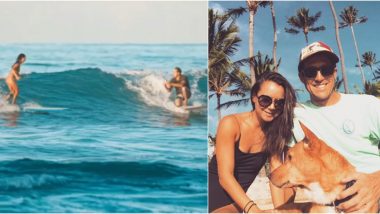 A Hawaiian man proposed to his girlfriend while surfing in the ocean! But the proposal did not go planned as the ring ended up in the water, however, the story doesn't end there. Foreseeing a probablity, Christopher Garth had used a fake ring to propose Lauren Oiye and kept the real one safe and sound on the beach. Both had met each other at the same location years ago.  The fake ring fell for his hands a second after Lauren excitedly said 'Yes'! And now pictures of Christopher Garth kneeling on a surfboard with a ring in his hand in front of a smiling Lauren has gone viral on social media platforms. Love Is in the Air! Pilot Proposes to Girlfriend at 5,000 Feet, Before Pretending to Make Emergency Landing (Watch Adorable Video)

The real ring was kept at Queen's Beach in Waikiki, where they met two met years ago. Sharing pictures of the proposal on Instagram, Lauren wrote, "Christopher Garth, I love you and am so grateful the stars aligned and our ancestors that came before us so beautifully orchestrated this for us! Here’s to a lifetime of laughter and keeping things simple and authentic!" She added, "This morning my best friend @this_garth and I went out for a surf. Little did I know he would be asking me to be his partner for life!" World's Most Unique Wedding Proposal? Japanese Man Travels 6 Months to Spell 'Marry Me' on Google Earth, Watch Viral Video.

Check Out Pictures of Two Surfers Getting Engaged:

She shared more pictures from their special day also wrote how much the water means to both of them. In a touching post on Instagram, she wrote, "Ohhhh this place has been a source of so much happiness and growth. It always was and will be a special place for us." She further writes, "These waters have called me home to her eight years ago to embark on an adventure in healing, LOVE, and forever connections that I did not anticipate. So grateful for the water that connects us all and this place that is my home."

(The above story first appeared on LatestLY on Nov 15, 2019 06:00 PM IST. For more news and updates on politics, world, sports, entertainment and lifestyle, log on to our website latestly.com).