Teach For India, a popular educational non-profit, has asked three of its members to go on a temporary leave of absence, following accusations of sexual misconduct claimed by several women who closely worked with the organisation in the past. 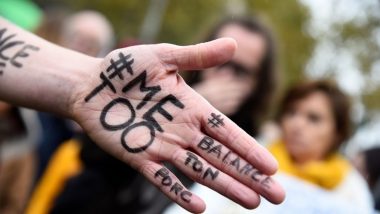 The #MeToo allegations are spreading like wildfire in our country. After top-notch personalities in the media industry, it has now reached to non-profit organisations. Teach For India, a popular educational non-profit, has asked three of its members to go on a temporary leave of absence, following accusations of sexual misconduct claimed by several women who closely worked with the organisation in the past. As of now, at least five related incidents have appeared on Twitter against India’s leading non-profit. Fake Tweet of Aishwarya Rai Bachchan’s #MeToo Story on Physical Abuse Goes Viral.

It all began on October 12, an alumna of Symbiosis Centre for Media and Communication, Poulomi Roy who alleged Teach For India fellow, Kapil Dawda for sexually and mentally harassing her while she was interning with the organisation. She explained, that Dowda touched her inappropriately, made derogatory remarks and harassed her professionally. It soon went viral and reached to many women who shared similar allegations against Programme Manager Sachin Paranjpe and Pune Director Abhimanyu Sarkar. #MeToo: 'He Touched My Butt, and Dragged Me Towards Himself,' Elnaaz Norouzi Accuses Vipul Amrit Shah of Sexual Harassment.

First hand account of a survivor from @TeachForIndia. @heauxbaton publicly talks about her internship at TFI and the sexual harassment and abuse she faced. More power to you Poulomi #MeToo #TimesUp pic.twitter.com/5hOhvGX9gf

Reacting on the line of allegations, Teach For India said in a statement, “We are shocked and saddened by the allegations that have recently been raised involving members of the Teach For India community. We believe in a workspace where all of our members, especially our women, feel valued and safe. We are currently working round the clock to investigate and take necessary action, in line with the Sexual Harassment Act. We have an Independent Complaints Committee in place as per the law and are being guided by independent counsel and expertise to ensure objectivity. While investigations are on, we have asked the three alleged members of our community to take a temporary leave of absence.” #MeToo in India During Navratri Is Just What Maa Durga Would Be Proud Of.

Started in 2009, Teach For India works with graduates and young professionals who after round of training, are placed in government or low-income private schools to teach full-time. These fellows remain in the position for two years, and later finds related job opportunities. After such accusations of sexual misconduct, Teach For India has also stated that a complaint redressal email, grp@teachforindia.org, has been activated where all sexual harassment grievances can directly be addressed to the Internal Complaints Committee. The investigations against its members are underway.

(The above story first appeared on LatestLY on Oct 20, 2018 02:10 PM IST. For more news and updates on politics, world, sports, entertainment and lifestyle, log on to our website latestly.com).

Comments
Tags:
#MeToo #metoo movement in India Teach for India Teach For India #MeToo allegations
Comments
You might also like