New Swine Flu, G4, Having Pandemic Potential Discovered in China BUT Netizens Share Funny Memes and Jokes Because Nothing Comes as a Surprise in 2020 Anymore! 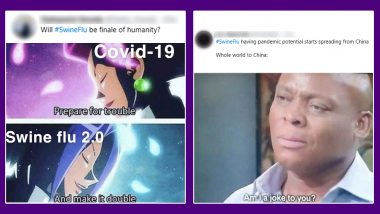 We need to stop saying, "2020 cannot get any worse" because guess what, every time you say that satan says "Challenge accepted". So yes, while we brave the coronavirus pandemic, researchers in China have discovered a new type of swine flu called G4, that is capable of triggering a pandemic. ANOTHER PANDEMIC! Yes, as if whatever was happening in 2020 wasn't enough that now we have Swine Flu to worry about, because according to a study published Monday in the US science journal PNAS, Named G4 (genetically descended from the H1N1 strain that caused a pandemic in 2009) possesses "all the essential hallmarks of being highly adapted to infect humans," according to the authors, scientists at Chinese universities and China's Center for Disease Control and Prevention. The news has definitely created a panic situation on social media while we maintain social distancing, but people are expressing it via humour and sharing funny memes and jokes because, for real, nothing else even matters any more in 2020.

Jokes aside, it is important to understand that the swine flu has been found and experts may have time to contain it in time. Also, the study says that about 10.4 percent of swine workers had already been infected which means it can be passed from animals to humans but there is no evidence yet that it can be passed from human to human. So while we hope for the best, here are some of the funny memes and jokes doing rounds on Twitter:

So now #SwineFlu is trending and too is found in China and has pandemic potential.😖 pic.twitter.com/exzgitWRC2

China is talking about #SwineFlu

It Hurts But It is Funny!

Why, Swine Flu, Why?

After seeing the combo of #SwineFlu and Corona at the same time.

People who recovered from crona after seeing #SwineFlu is trending... pic.twitter.com/cy70jAwQTZ

While the majority were of a new kind which has been dominant among pigs since 2016, G4 was observed to be highly infectious, replicating in human cells. It has been known to be causing more serious symptoms in ferrets than other viruses. Tests also showed that any immunity humans gain from exposure to seasonal flu does not provide protection from G4.

(The above story first appeared on LatestLY on Jun 30, 2020 12:20 PM IST. For more news and updates on politics, world, sports, entertainment and lifestyle, log on to our website latestly.com).