Megan Milan a model in New York has made waves on the social media recently with her super sexy poses that make her a replica of the Bajirao Mastani fame. In fact, a lot of people feel she should be as recognisable as Priyanka Chopra. 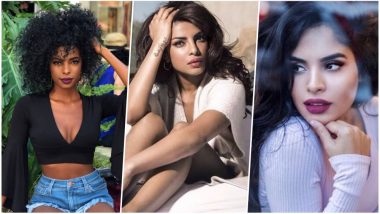 The idea of having a doppelganger at some corner in the world is so fascinating. And it is not uncommon to find everyday people who resemble superstars.  Some style themselves to match their favourite celebrities while others just naturally look like their carbon copy. If you are a social media freak, you must be aware of the recent buzz as yet another doppelganger of the Quantico girl Priyanka Chopra has come up. So now we have got three!

Well, it turns out that the PeeCee has got another much closer lookalike in New York! Megan Milan a model in New York has made waves on the social media recently with her super sexy poses that make her a replica of the Bajirao Mastani fame. In fact, a lot of people feel she should be as recognisable as Priyanka Chopra. Twitterati has drilled this connection and it has got thousands of retweets just in approval of this observation.

Remember Navpreet Banga? A Vancouver-based fitness vlogger. You pretty much cannot sight the difference between the leading Hollywood queen Priyanka and this fitness freak NRI Navpreet. Some even say that their voice is similar too.

Now, take a look at this Pakistani model and actor Zhaylay Sarhadi. It was last year that the Zhaylay was compared to the Desi girl Priyanka Chopra for her uncanny resemblance to the actor. As per the reports released that time, Zhalay shared how once an Indian actor she had been working with, sent her pictures as her friends and agents cracked a joke, “Who is this? Priyanka ki cousin aisi toh nahin hai.” She also offered to do a body double for the 35-year-old actor.

Meet the Baywatch girl lookalike who is a Pakistani model and actor Zhalay Sarhadi.

Loving this lippie from #massaratmisbahmakeup 😍😘

It is said that everyone has six lookalikes and our very own aka Alex Parrish has found three already. What do you think?

Meanwhile, Priyanka Chopra is busy with her International TV show Quantico season 3. It is rumoured that she could be seen in the sequel of Aitraaz as the filmmaker Subhash Ghai is almost done with the final script.

(The above story first appeared on LatestLY on Feb 22, 2018 12:48 PM IST. For more news and updates on politics, world, sports, entertainment and lifestyle, log on to our website latestly.com).