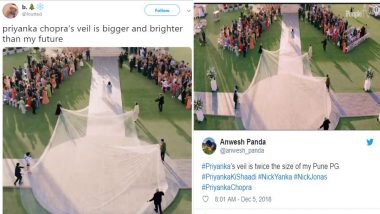 The most awaited wedding of 2018 was of Priyanka Chopra and Nick Jonas. It is safe to say that Nickyanka has the grandest wedding of all time! More like a fairy tale this wedding looked like it was straight out of a dream. For sure their marriage was a royal affair! However, amongst trillion other amazing things from Priyanka Chopra-Nick Jonas wedding, what really became the highlight was the 75 ft veil Priyanka Chopra had donned for the Christian wedding the two stars had. Priyanka Chopra in Ralph Lauren Bridal Gown or in Sabyasachi Traditional Red Lehenga – Which Bridal Look Do You Love from Her Wedding – See Pics.

While we were still collecting our jaws from the floor after checking out the pictures for her colourful Mehendi and sangeet, we were graced with the wedding pictures and videos from the royal Priyanka Chopra-Nick Jonas wedding. Especially the Christian wedding pictures that were breathtakingly beautiful! However, the 75ft long veil of Priyanka Chopra has been the talk of the town. The meme brigade also had a gala time churning out hilarious memes and jokes around the long veil w that will make your day. Take a look at some of the jokes that have been making the rounds on social media.

But before that, here's the full video of Priyanka Chopra walking down the aisle with her best man- her mother Madhu Chopra.

Officially rewatching this walk down the aisle until the end of time 😍 @priyankachopra and @nickjonas had the wedding of their dreams. Watch their magical day unfold here: https://t.co/jFnGO1NUij pic.twitter.com/plGC76xBbU

Isn't that as dreamy as it can get? Now take a look some of the most hilarious memes about her extremely long veil.

priyanka chopra's veil is bigger and brighter than my future pic.twitter.com/7UhoGBz92T

I aspire to be as extra as @priyankachopra’s 75 ft veil pic.twitter.com/uDsFe93s8n

The dreamiest of all macchardanis!

Thank you @priyankachopra for letting us know that you can use mosquito net a.k.a machardani has a veil. pic.twitter.com/EfNWhgZmdQ

Priyanka Chopra's veil could serve as a mosquito net for my entire apartment with double insulation for the my windows. Wawu!!

Priyanka Chopra’s veil is bigger than a 1 RK flat in Mumbai. pic.twitter.com/rV7CGPVuIM

I think Priyanka really loves long trailed dressed just like her RalphLauren dress at the Met Gala, which also, by the way, became a famous meme real quick! We will wait for more such beautiful sightings from Priyanka Chopra and her long trails!

(The above story first appeared on LatestLY on Dec 05, 2018 11:33 AM IST. For more news and updates on politics, world, sports, entertainment and lifestyle, log on to our website latestly.com).