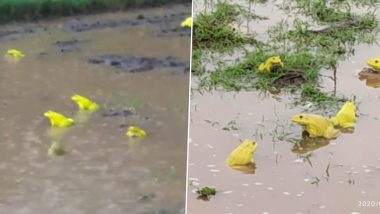 In the last two days, the city of Mumbai and around have experienced heavy rainfall, resulting in water-logging at several places. The onset of monsoon is often marked with sights of earthworms, other insects and the unmissable croaking of frogs. After heavy rains followed a seemingly dry spell, a group of rare yellow frogs arrived in groups at a farm in Vasai. A video has been shared online which shows an army of frogs croaking, jumping around and mating in puddles of a farm. Incidentally, the same species of frogs were also spotted in Maharashtra's Buldhana district a week ago. Frog Caught Eating One of The Most Venomous Snakes in The World! (View Pics).

With the beginning of rains, farmers have begun to plough their fields for crops. In Vasai's Navale region, a farm owned by Vishal Vartak saw an army of yellow frogs. As the name suggests, these amphibians are completely yellow in colour. They have a unique croaking voice which differentiates them from other regular frogs. Their sighting has become a topic of curiosity among the residents here. A video of these frogs has been shared online. After Salazar Slytherin Snake, Three New Horned Frog Species Discovered From North East India; Know More.

Notice the croaking? There are close to 10 frogs in the video, there could be more in the fields behind. The same species was seen about a week ago in Buldhana's Khamgaon region. Videos and pictures of these frogs from Ghatpuri region were shared on Facebook.

It is so fascinating to see these coloured frogs. So what are these species and are they dangerous? No, they are not. And what we see above are just the videos probably before their mating.

Indian Bullfrogs: These are the Indian bullfrogs (Hoplobatrachus tigerinus). They are found in India, Bangladesh, Pakistan, Nepal, Myanmar, Afghanistan, and Sri Lanka. They are also found in the Maldives and Madagascar. They are usually brownish to olive green in colour but they change their colours during mating to yellow! They are not poisonous. They usually live in solitary state in wetlands and gather together only for mating. The presence around the fields is beneficial in controlling the pests damaging the crops.

(The above story first appeared on LatestLY on Jul 07, 2020 11:18 AM IST. For more news and updates on politics, world, sports, entertainment and lifestyle, log on to our website latestly.com).