#ThalapathyDayCommonCP: Why are All Vijay Fans Keeping a Common Cover Picture on Twitter?

Vijay's fans are at it again as they get the South superstar trending again, this time with a common cover picture. 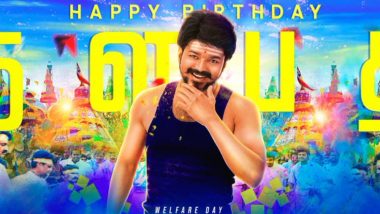 Vijay fans have taken over the internet since the past few days and have been making sure to keep the South Superstar on the top of the trends ahead of his birthday. The actor will be celebrating his birthday on June 22 and several of his fan clubs have been planning to make it special by keeping him as a top trend on Twitter. After the 'Me - Vijay' trend, the newest craze that his fans are involved in is changing their cover pictures. If you happen to go through Twitter right now, you will find several users have now changed their cover pictures to a poster of Vijay. Me - Vijay Trends on Twitter: Here's Why Netizens are Sharing Pictures of the South Superstar and How it All Started!

This has started a new trend and now users have been tweeting with hashtag, #ThalapathyDayCommonCP once they change their cover photos. What's even more interesting is that Vijay's fans from all over the world have decided to keep a common display picture for his birthday which will be unveiled next week.

Recently, another South sensation, Ajith's fans too got the actor's new trailer trending after they tweeted their favourite dialogues from the trailer. It seems to be a competition among fan clubs who are going out of the way for their favourite actors to become a popular trend.  Nerkonda Paarvai: Twitterati Can't Get Over Thala Ajith's Powerful Dialogues From the Trailer.

Check out some of the tweets in ##ThalapathyDayCommonCP:

200K tweets On the Way 🔥#ThalapathyDayCommonCP

It looks like the Mersal star is going to get a massive surprise on his birthday considering his fans may just break some trending records.

(The above story first appeared on LatestLY on Jun 15, 2019 10:08 PM IST. For more news and updates on politics, world, sports, entertainment and lifestyle, log on to our website latestly.com).