This Guy’s Uber Driver Started a Trip Without a Pick Up and Charged Him for the Mystery Joy Ride!

Preshit Deorukhkar had booked an Uber from Malad but surprisingly his driver did not conduct the pickup and started the trip. Plus, the driver's phone number was also unavailable to call and check up on him. 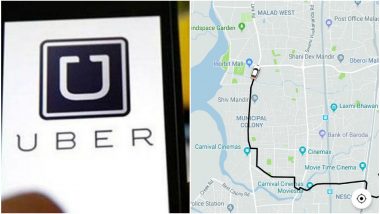 Cab aggregator services like Ola and Uber may be of convenience for regular travellers but there have been quite a few incidences when they have goofed up, that too real bad. A Mumbai passenger had to experience something similar when his Uber driver started the trip but without picking him up! Preshit Deorukhkar had booked an Uber from Malad but surprisingly his driver did not conduct the pickup and started the trip. Plus, the driver's phone number was also unavailable to call and check up on him.

Preshit took to Twitter and gave details about the long journey that his Uber driver was on, and spun a mystery around this driver's journey which had everyone hooked. The driver's name was also just 'P' so there was something fishy with him. What's funny is he even got a bill request of Rs. 857 and the option to rate the trip.

Take a look at the Uber driver's joyride:

@UberINSupport Hi, your 1-trip driver has started the trip without arriving at the location. His phone isn't reachable. What do I do? pic.twitter.com/L6tRT95gmI

Now he is just aimlessly roaming around on the Link road. pic.twitter.com/ZcsY5pcQK6

Pickup was in Malad West. Driver has now reached the edge of north Mumbai. I'm assuming he has to dump something in the khaadi. pic.twitter.com/pG3QmAo6lg

Umm... Did he just take the Gorai jetty to the other side? pic.twitter.com/eeIdoSBVLw

Looks like he is going to medicate. Must've been a tiring day so far. 😂 pic.twitter.com/6dO8ziyqd6

Or is there a dead body? The suspense grows...

Or he is dumping a dead body sealed in the car deep in the mangroves, me thinks. pic.twitter.com/SBokjKaLkK

On the way back, he took a much longer route!

He is taking the longer, less scenic route back the city now. pic.twitter.com/uW1RogD6gL

Seriously, what is P up to?

Whoops! Change of plans, he is turning back and heading to nowhere pic.twitter.com/LXtN3NFJdR

"P" has now stopped at Vailankani church. I hope he's going to confess his sins. pic.twitter.com/sEY546CzB9

Back to the Mangroves?

I guess we are headed back to the mangroves now. pic.twitter.com/ni3QnxBYkA

There's got to be some major stash buried here, right? Gold? Drugs? Arms and ammunition? pic.twitter.com/wkjUmYUgCE

Are the cops involved?

He's stopped here for some reason. What role are the cops playing in this story 🤔 pic.twitter.com/pgNdG5vXVn

Back in the city!

He's on the highway now, towards the city. pic.twitter.com/YrnwlZXCet

Oh hey, here's the bill for the joyride!

The whole thing does look mysterious right? What was this weird name Uber driver up to and his journey route was also a little suspicious? After all of this suspense Uber only replied that his payment would be refunded in the next few days into his account. There was no apology or anything just that they have noted about the driver. Well, the mystery remains!

(The above story first appeared on LatestLY on Jul 20, 2018 11:24 PM IST. For more news and updates on politics, world, sports, entertainment and lifestyle, log on to our website latestly.com).