The fun event turned horrific when a wife slipped from her partner and crashed her head on the ground. 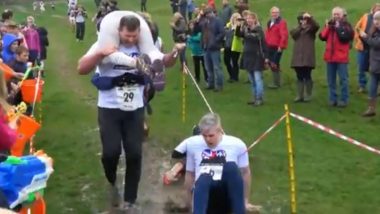 UK's Dorking has a wife carrying event every year. The event is so famous that Dorking literally became talked about for it. This year too the competition was held on the morning of Sunday, April 8, 2018. The competition saw enthusiastic couples, over hundreds of them taking part in the race. But the fun event turned horrific when a wife slipped from her partner and crashed her head on the ground. She had to be taken away by the paramedics and the incident really shocked the spectators.

The woman was writhing in pain while she was being carried away and they put a brace around her neck. The husband was carrying her over his shoulders with her feet in front of his face. He slipped because of the muddy ground conditions. The incident took place in the splash zone of the competition where spectators are asked to bring water pistols and buckets of water. The husband fell on his bottom which made his wife crashed with her head down. She went crashing on the ground and landed on her neck in the muddy grass below. Because she had her helmet on, she was less injured.

Check out the video of the woman crashing during Wife Carrying Competition:

Wearing a helmet is a compulsory rule of the event. But the incident was quite horrifying and crowds too gasped in horror to see the accident unfold in front of their eyes. Her worried partner rushed to her side but she had to stretchered away on a spinal board. The extent of the injuries is not yet clear.

This was the 11th year of organising the iconic race and the requirement is for the wife to weight at least 50kg. It is a 380-metre course for the race. Also it is not necessary for the couple to be married. The man can choose who they have to carry in the race.

(The above story first appeared on LatestLY on Apr 08, 2018 07:41 PM IST. For more news and updates on politics, world, sports, entertainment and lifestyle, log on to our website latestly.com).