Viral Food Videos 2021: From Oreo Pakodas to Maggi Milkshake, Weirdest Food Trends That We Wish Ends With The Year

Social media is an amazing world and in terms of food, it has to offer some sights that may be too bizarre for the eyes, let alone the tongue. These days some or the other food trend keep going viral and some of them make up for unique and weird food combinations as well. 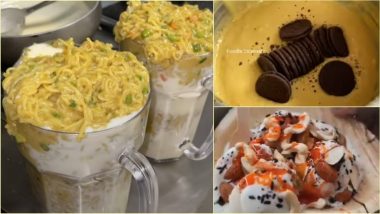 Social media is an amazing world and in terms of food, it has to offer some sights that may be too bizarre for the eyes, let alone the tongue. These days some or the other food trend keep going viral and some of them make up for unique and weird food combinations as well. For the year 2021 we've seen it all... right from Oreo Pakoda and Maggi Milkshake, every weird thing you can think of made it to social media. Let's take a look at some of the most viral social media food items that people couldn't stop talking about in the year 2021: 'Jalebi Chaat' Goes Viral on Twitter! New Food Abomination Makes Netizens Seek Forgiveness From Culinary Gods.

Maggi made in Fanta went viral and HOW! This cart from Ghaziabad selling Fanta Maggi took over social media after a food blogger shared the video on the Facebook. As it is seen in the video to make Fanta Maggi, the person first pours ghee, then adds onion, green chili, capsicum and tomato to fry. After this, Fanta cold drink is added to it. After this, Maggi is added by mixing spices, turmeric, coriander and salt in it. With a dash of lemon and chaat masala, this strange Maggi is prepared. Watch video:

A video surfaced from Delhi went viral this year where people were angry at the weird experiment done with famous South Indian staple- Dosa.  In the video a person can be seen making fruit dosa. Watch video:

In September, 2021, a photo of two glasses of Maggi milkshake went viral leaving netizens furious.  Maggi mixed with milkshake? Crazy right? But it is true. Check out the image showcasing two glasses of milkshake, topped with maggi:

Dont trade if you are having this : Maggi Milkshake.

Looking for person who made this! pic.twitter.com/bsAc92vNMp

Sounds completely weird right? A video of an Ahmedabad eatery selling Oreo ke pakode went viral on YouTube. It is exactly how normal pakoras are prepared except with oreos as filling. Netizens were disgusted. Watch video:

After Fanta maggie, we also saw Mirinda Golgappe as if all this was not enough. Check out the video featuring a golgappa vendor selling Mirinda golgappas:

A sweet mixed with savoury food doesn't sound that bad, but what happens when you hear, Rasgulla with Chaat? Horrible right? Well, here's a video of the most bizarre food combination:

We are doomed. Rasgulla chaat!! pic.twitter.com/tjRZ4lcMVl

Well, as new year is approaching, we only hope we see better food trends take over social media. Something that keeps two amazing food items far apart without making and amobination of a "food fusion" item.

(The above story first appeared on LatestLY on Dec 30, 2021 03:05 PM IST. For more news and updates on politics, world, sports, entertainment and lifestyle, log on to our website latestly.com).