Woman and Husband Fell in Love With Her Bridesmaid and Now Live Together, But There's NO SEX! Watch Video of This Polyamorous Triad 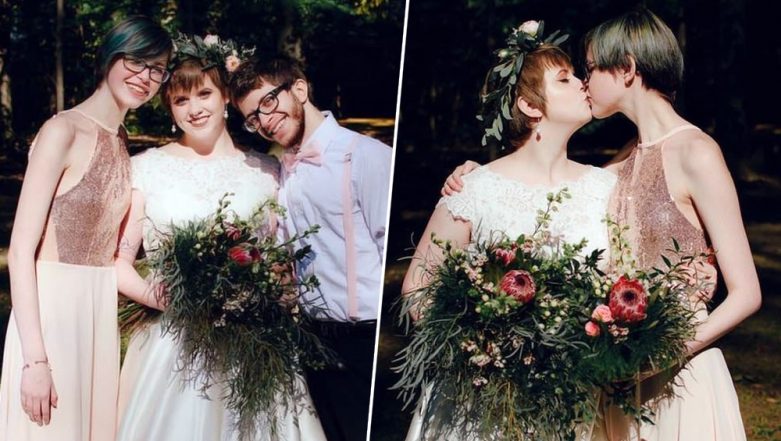 In a strange case of an asexual relationship, two women are in a relationship with the same man. So while they all sleep together, they don't have sex! It may seem a bit complicated but a married woman named Karalyn Henry is in a polyamorous relationship with her bridesmaid as well. Luckily for her, her boyfriend and to be husband Justin was too understanding and let her get along with girls on a date and figure out herself. But on the wedding day, the husband too couldn't control falling in love with his wife's girlfriend, who came in as the wife's bridesmaid. Polyamorous Vampire Couple Reveal How They Use Sexual Energy and Blood to Feed Themselves.

This unique relationship case is from Ohio. Karalyn Henry was 17-years-old when she realised and confided with her boyfriend that she is attracted to the opposite sex. Justin was okay to let her explore her orientation and advised her to look if she's interested in girls as well. Karalyn found her comfort in Lana Douglas from Northern Ireland. The two were chatting along for months and hit it off. The two girls carried off with a long-distance relationship. The comfort of their relationship reached such a level that the couple wanted Lana to be their bridesmaid. And incidentally, it was the first time they would meet her. Mother-in-law Attracted to Her Son-in-law Steals His Nudes From Daughter's Phone.

On the day of the wedding, when Lana came all dressed up, it wasn't just Karalyn who was in love. Her husband Justin too was attracted to her beauty. Soon they became a poly V Triad, but Lana to is asexual. Talking about their relationship, Lana was quoted to Daily Mail, "Once Lana and Justin were face-to-face, they both ended up falling for each other, and we then became a poly triad, meaning we were all dating each other with no exclusions." It was weird to all the family members but once they saw the three of them getting along, they did not mind. They have even documented their relationship and its progress on their YouTube Channel.

Watch Video of Karalyn Explaining Her Relationship of Poly Triad

Now Karalyn too doesn't have a problem that her girlfriend and her husband are dating. The three people now share a bed but there is no sex involved as Karalyn sleeps in between her husband and the girlfriend. The poly triad is not married to each other but they are in a relationship with each other. So all three of them go on dates together, go hiking, take on adventures. It is one of a kind relationship where all the people are happy with each other.