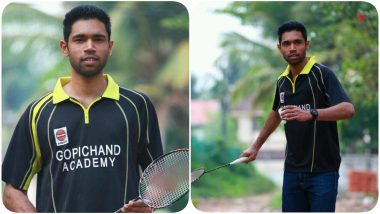 Born on August 2, 1988, Arun Vishnu is one of the most prolific shuttlers who represents India in several international tournaments. Arun Vishnu was born to Dr K. Sivarajan and K. Revamma in Calicut, Kerala. His full name is Sivarajan Revamma Arun Vishnu. He completed his post-graduation in Commerce from Farook College, Calicut affiliated with the University of Calicut. He partners with Aparna Balan and Alwin Francis in mixed doubles category and men's doubles category respectively. Vishnu’s career-best world ranking is 37 and 41 in men's doubles and mixed doubles category respectively. On this day ad Vishnu turns a year older, let’s have a look at five quick facts about the ace shuttler. BAI Announces Squad for Junior Asian Badminton Championship 2019.

That's all we have in this article for now. If you think we have missed out any pointers, feel free to comment about the same in the comments section below. We Wish Arun a very happy birthday on this day.

(The above story first appeared on LatestLY on Aug 02, 2020 08:00 AM IST. For more news and updates on politics, world, sports, entertainment and lifestyle, log on to our website latestly.com).