Chess Olympiad 2022: 213 Teams Including From Ukraine Registered for Competition in Mahabalipuram

A total of 213 teams from over 100 countries including Ukraine, have registered to compete in the 44th Chess Olympiad to be held at Mahabalipuram, said an official of All India Chess Federation (AICF). 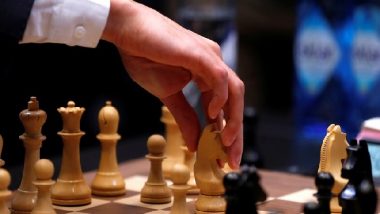 Chennai, May 12: A total of 213 teams from over 100 countries including Ukraine, have registered to compete in the 44th Chess Olympiad to be held at Mahabalipuram, said an official of All India Chess Federation (AICF).

"Till now 115 teams in the open category and 98 teams in the women's category from over 100 countries have registered to play in the upcoming Chess Olympiad. The names of the players are not known," secretary, AICF and Olympiad tournament director, Bharat Singh Chauhan told IANS. Chess Olympiad 2022: FIDE Suspended Russia and Belarus National Teams; Not to Play in Chennai Olympiad.

Chauhan said major chess playing countries like USA, Norway, Netherlands and Ukraine have confirmed their participations in the Olympiad. The Olympiad will be held between July 28 and August 10.

Owing to the military action against Ukraine, the International Chess Federation (FIDE) has banned Russia and Belarus from competing in the event. Based on the rating averages of their top five players, USA tops the table with 2,766 and is followed by China (2,739), Azerbaijan (2,700), India Team 1 (2,683) and Ukraine (2,681).

India will field four teams, two in the open and two in the women's section, and the names of the players have been announced.

This apart, India has started the process of selecting one more team in case a situation arises of fielding an additional team based on an odd number of entries.

The AICF said the additional team will be selected based on following criteria on June 28 2022:

Alongside the event, the International Chess Federation will hold its Congress between July 31 and August 9. The Meeting of the General Assembly will take place on August 7-8, when the elections will be completed.

According to FIDE, the elections will take place for President and Deputy President (on a joint ticket), Vice President, Zonal President, a member of the Ethics and Disciplinary Commission and a member of Constitutional Commission.

Enyonam Sewa Fumey, of Togolese Republic has announced his decision to contest for the post of FIDE President against the incumbent Arkady Dvorkovich. Fumey has announced that his Deputy-President would be FIDE Master (FM) Stuart Fancy, a resident of Papua New Guinea.

(The above story first appeared on LatestLY on May 12, 2022 12:36 PM IST. For more news and updates on politics, world, sports, entertainment and lifestyle, log on to our website latestly.com).