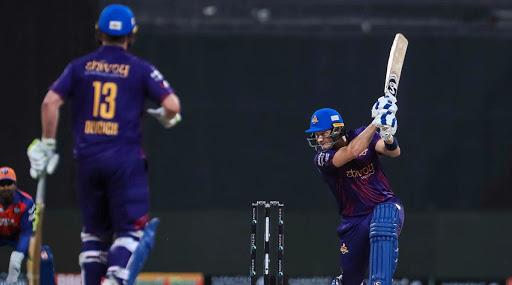 It was quite a chock-a-block day at the Abu Dhabi T10 League 2019 as, Qualifier 1, Eliminator and Qualifier 2 were played on the same day. For now, we are particularly talking about the Qualifier 2 which will be held in a while now between Qalandars and Deccan Gladiators at the Sheikh Zayed Stadium, Abu Dhabi. Before getting into the live streaming details of the upcoming game, let’s have a look at how the two teams fared in their previous games. So the Qalandars today played the Qualifier 1 against the Maratha Arabians where the later walked away with a seven runs win. Abu Dhabi T10 League 2019 Points Table Updated: Deccan Gladiators Lead Team Standings in Super League Stage, Northern Warriors Follow on 2nd Spot.

It was Chris Lynn for the Maratha Arabians who once again who was blazing guns as he made 67 runs from 30 balls. He laced his innings with four boundaries and six maximums. The team made a total of 119 runs. Jordan Clark snapped four wickets for the Qalandars. However, none of the batsmen from the Qalandars could really reach the total. It was Laurie Evans who made the highest total for the team scoring 35 runs from 17 balls. Now, let’s have a look at the live streaming details of the game below:

Fans can catch the live action of Bangla Tigers vs Maratha Arabians match in Abu Dhabi T10 league 2019 on Sony Pictures Networks India channels. Sony Pictures Network (SPN) is the official broadcaster of Abu Dhabi T10 League in India and will be live telecasting the matches. Viewers can tune into Sony Six and Sony Ten 3 channels to catch the QAL vs DEG game live on television.

SonyLiv, the official online media streaming outlet of Sony Network, will be live streaming the Qalandars vs Deccan Gladiators, encounter online for its fans in India. Fans can either download the app or log in to sonyliv.com to enjoy QAL vs DEG live action.