The 30-year-old is currently serving a three-week ban from cricket for recreational drug use. 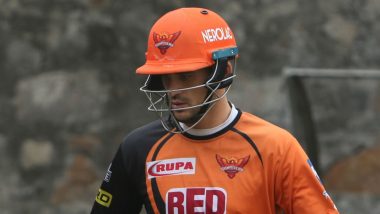 London, April 29: England batsman Alex Hales has been withdrawn from the national squad for the upcoming World Cup slated to be held from May 30. Hales will also not feature in the one-off ODI against Ireland and the subsequent limited overs series against Pakistan, the England and Wales Cricket Board (ECB) confirmed on Monday. England Opener Alex Hales Banned for 21 Days for Recreational Drug Use Ahead of World Cup 2019.

The 30-year-old is currently serving a three-week ban from cricket for recreational drug use. Earlier this month, it was announced that Hales had "made himself unavailable for selection for personal reasons", stepping away from both Nottinghamshire and England selection as the new season got underway.

However, The Guardian reported that he is currently serving a 21-day ban after failing a second drugs test of his career, which also resulted in him being fined five per cent of his annual salary.

Commenting on the decision, Ashley Giles, ECB managing director of men's cricket, said, "We have thought long and hard about this decision. We have worked hard to create the right environment around the England team and need to consider what is in the best interests of the team, to ensure they are free from any distractions and able to focus on being successful on the pitch."

The development has come as yet another blow to Hales, who was fined and suspended last year after he and Ben Stokes were involved in a brawl outside a Bristol nightclub in September 2017. Ahead of World Cup, England's Alex Hales Banned for Recreational Drug Use.

"I want to make it clear this is not the end of Alex's career as an England player. The ECB and the PCA will continue to aid Alex and work alongside his county club Nottinghamshire to give him the support he needs, to help him fulfil his potential as a professional cricketer," Giles said. His replacement will be announced in due course of time, said the ECB in their statement.

(The above story first appeared on LatestLY on Apr 29, 2019 03:56 PM IST. For more news and updates on politics, world, sports, entertainment and lifestyle, log on to our website latestly.com).