No official statement has been issued by the England and Wales Cricket Board (ECB) regarding this matter. 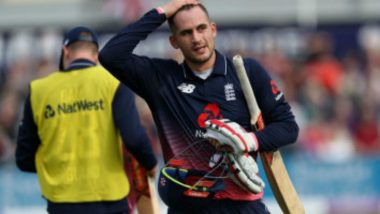 London, April 27: England batsman Alex Hales has been banned for three weeks from cricket for recreational drug use. Earlier this month, it was announced that Hales had "made himself unavailable for selection for personal reasons", stepping away from both Nottinghamshire and England selection as the new season got underway. Ahead of World Cup, England's Alex Hales Banned for Recreational Drug Use.

However, The Guardian reports that he is currently serving a 21-day ban after failing a second drugs test of his career, which has also resulted in him being fined five per cent of his annual salary. While the exact date of the notice handed to Hales is unknown, it is believed he will have served his 21-day ban before England's ODI against Ireland on May 3. No official statement has been issued by the England and Wales Cricket Board (ECB) regarding this matter.

At the start of every season, all professional male cricketers under the ECB's jurisdiction, along with centrally contracted female players, are subject to hair follicle testing. The testing of hair follicles means banned substances can be detected up to three months after their consumption.

Players that fail a recreational drug test for the first time are not named. However, under ECB's rules, a second positive test results in an automatic 21-day ban from all cricket and a third brings a 12-month suspension. The Guardian quoted a spokesperson for Hales as confirming that he had been suspended "following an off-field incident last year".

"He will be joining the squad in preparation for next week's games and will be available for selection. Whilst the issue is not cricket related, Hales accepted that it was right that he was suspended. He is now fully focused on returning to cricket and is committed to working tirelessly for both Nottinghamshire and England throughout the summer. No further comment will be made on this issue," the spokesperson added. Hales is still expected to attend England's training camp in Cardiff this weekend. Alex Hales Goes on Indefinite Break for ‘Personal Reasons’ Ahead of ICC World Cup 2019.

The development comes as yet another blow for Hales, who was fined and suspended last year after he and Ben Stokes were involved in a brawl outside a Bristol nightclub in September 2017. The 30-year-old has scored six centuries and 14 half-centuries in 70 ODI games for England.

(The above story first appeared on LatestLY on Apr 27, 2019 12:33 PM IST. For more news and updates on politics, world, sports, entertainment and lifestyle, log on to our website latestly.com).