The right-hander has to be one of the biggest finds of the ongoing ICC U19 World Cup as he won a lot of hearts with his consistent performances. Recently, the youngster revealed that he was a fan of Royal Challengers Bangalore and wanted to play for the franchise in the IPL. 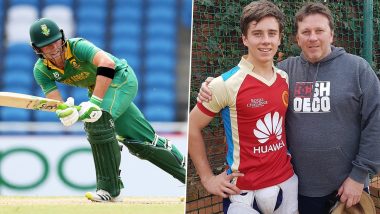 Dewald Brevis is a name that has already started doing the rounds. The Proteas batter, who is currently representing his nation at the ICC U19 World Cup 2022 first came to the limelight due to an uncanny resemblance of his batting technique with that of AB de Villiers, who is one of the best from the Rainbow Nation and undoubtedly, the most dynamic ever to have played the game. He was subsequently nicknamed 'Baby AB', The young right-hander now has expressed his desire to play for Royal Challengers Bangalore in the IPL, something that would be loved by fans of the Bengaluru-based franchise. Dewald Brevis, SA U19 Cricketer, Bats Like AB de Villiers; Teammates Call him 'Baby AB' (Watch Video)

Brevis has been incredibly consistent with the bat in the ongoing U19 World Cup. He has scored three fifties and one hundred in four games. While interacting in a recent interview, was quoted as saying, "For me, one of the biggest dreams is to play for the Proteas. I'm such a big fan of IPL and I would love to play the IPL for RCB. I love RCB because Virat Kohli and AB de Villiers were there. I'm a big fan of Virat Kohli and AB de Villiers." What got fans even more excited was the fact that a photo of him in a RCB jersey got viral.

Here’s an Excerpt From the Video:

Except RCB other team even bid for Brevis after this video we should ban that franchise pic.twitter.com/4pLWI2qpce

The right-hander, who has already shown why he is one of the best youngsters in the sport, is currently the leading run-getter of the U19 World Cup 2022. He has amassed 362 runs in just four matches, at a jaw-dropping average of 90.50. His proclaimed idols--Virat Kohli and AB de Villiers would be mighty proud of these numbers! Not just with the bat but the youngster is quite capable of posing a threat with the ball in hand, having taken six wickets in four matches. He would be one of those players who is likely to be a target for a number of franchises in the IPL 2022 Mega Auction next month.

(The above story first appeared on LatestLY on Jan 28, 2022 11:34 PM IST. For more news and updates on politics, world, sports, entertainment and lifestyle, log on to our website latestly.com).