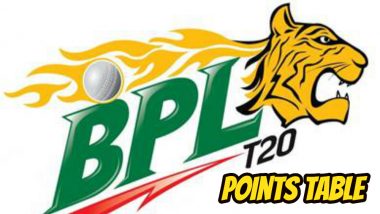 As far as the format of BPL 2019 is concerned, each team will face other teams twice in the round-robin stage. The top four teams on BPL 2019 points table after the league stage will proceed to playoffs.

The first and second placed teams will face off in the Qualifier 1 with winner directly progressing to the final. The third and fourth placed teams will take on each other in Eliminator, and the winner of this contest will face the loser of Qualifier 1 for a place in the final. BPL 2019 Schedule in PDF: Download Bangladesh Premier League 6 Full Timetable With Fixtures, Matches, Team and Venue Details.

(Updated Till Dhaka Dynamites vs Khulna Titans Match on February 02, 2019)

(The above story first appeared on LatestLY on Feb 03, 2019 07:20 AM IST. For more news and updates on politics, world, sports, entertainment and lifestyle, log on to our website latestly.com).