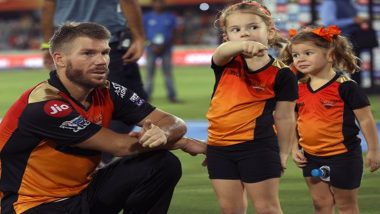 David Warner has posted an emotional message on social media after the IPL 2021 has been postponed indefinitely. Amid the rising cases of COVID-19 in the bio bubble,  the IPL Governing Council and BCCI took the decision of postponing the tournament unanimously. With this, he posted an emotional drawing made by his daughter Ivy and posted the same on social media. The little girl to the best of her capacities had a family of five on a piece of paper. Ivy had also written a message for daddy dearest which read, "Please Daddy come home straight away." Here’s Why Sacking David Warner as Captain Was a Wrong Decision by SRH Team Management.

Former SRH captain also shared the drawing on social media and wrote, "My gorgeous Ivy so much love @candywarner1 #family." David Warner has been in the news for being sacked not only from captaincy for the Sunrisers Hyderabad but also the Australian was axed from the playing XI from their last game against the Rajasthan Royals. The decision had shocked many including Ajit Agarkar who was not expecting this move from the franchise.

Now, let's have a look at the picture shared by David Warner:

With IPL 2021 getting postpone indefinitely, the BCCI is making provisions for sending the foreign players back home. The Australian PM Scott Morrison had imposed a ban on the people travelling from India. This also included the players. The likes of Adam Zampa and others had already left the tournament a few days ago.

(The above story first appeared on LatestLY on May 04, 2021 05:54 PM IST. For more news and updates on politics, world, sports, entertainment and lifestyle, log on to our website latestly.com).