Yes, I am heartbroken. But I don't see RCB's downfall as a failure of Virat Kohli or his captaincy. 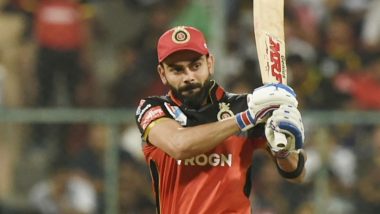 I am neither a cricket expert nor a blind worshiper of Virat Kohli or Royal Challengers Bangalore (RCB). I understand RCB players have so far been outperformed by their opponents in the ongoing Indian Premier League 2019 (IPL 2019). With RCB's latest defeat against Kolkata Knight Riders (KKR), the Virat Kohli-led team has now lost five consecutive matches. Yes, I am heartbroken. But I don't see it as a failure of Kohli or his captaincy. Andre Russell's 13-Ball 48 Powers KKR to Victory, Hands 5th Defeat to RCB in IPL 2019, Twitter Goes Berserk with Memes.

Despite being a die-hard RCB fan, I know the team is not playing good enough to win a match. It has limited options when it comes to players. Besides, those who have been given chance have so far not performed as per expectations. But, you cannot blame Kohli for this disastrous journey of RCB in IPL 2019. Kohli, as a batsman, may not have played exceptionally good, but his performance has remained above average.

Kohli has scored 162 runs in five matches with an average of 32.40. Yes, the numbers don't suit the batsman of his stature. But, the entire team cannot depend just on him. Similarly, you cannot pin the entire blame on him. No matter what, Kohli is leading RCB from the front. Watch his latest innings against KKR and you will notice how confident he was despite his team's terrible performance. Funny RCB Memes Go Viral As Andre Russell Onslaught Shocks Virat Kohli & Co. in IPL 2019 Match 17.

When you lose four back to back matches and you are the captain of the national team, immense psychological pressure is bound to seize you. However, Kohli came to the crease with zeal and scored the highest runs for RCB. The core problem lies in the bowling department. RCB needs a pacer who can restrict batsmen to single and doubles during death overs. This is an area where Kohli can do little or perhaps nothing.

Another concern of RCB is their poor fielding. Again, Kohli cannot cover the entire ground. I am not saying you to spare Kohli and blame someone else. But criticism should be for valid reasons. If his bowlers are unable to pick wickets or fielders are dropping catches, Kohli cannot be blamed for that. If you watched RCB vs KKR clash, you might have noticed that Kohli, as a captain, had been full of motivation and was encouraging his teammates as well. Andre Russell is Bahubali for Shah Rukh Khan After KKR All-Rounder Powers Team to 5-Wicket Win Over Royal Challengers Bangalore.

Yes, RCB is losing and it is almost impossible to reach to playoffs now. However, if you are an RCB fan, you know the team will make a comeback in the next season of IPL (in fact all is not over for them, teams like Mumbai Indians and Deccan Chargers went on to win the tournament despite starting on a poor note, just like RCB have). In 2008, RCB finished at second last. In 2009, it reached to the finals. In 2010, they couldn't make it to the finals. But, in 2011, the Men in Red were again playing in the finals. Dear RCB fans, enjoy the memes and jokes on our team and remember we will rise again!

(The above story first appeared on LatestLY on Apr 06, 2019 01:37 AM IST. For more news and updates on politics, world, sports, entertainment and lifestyle, log on to our website latestly.com).