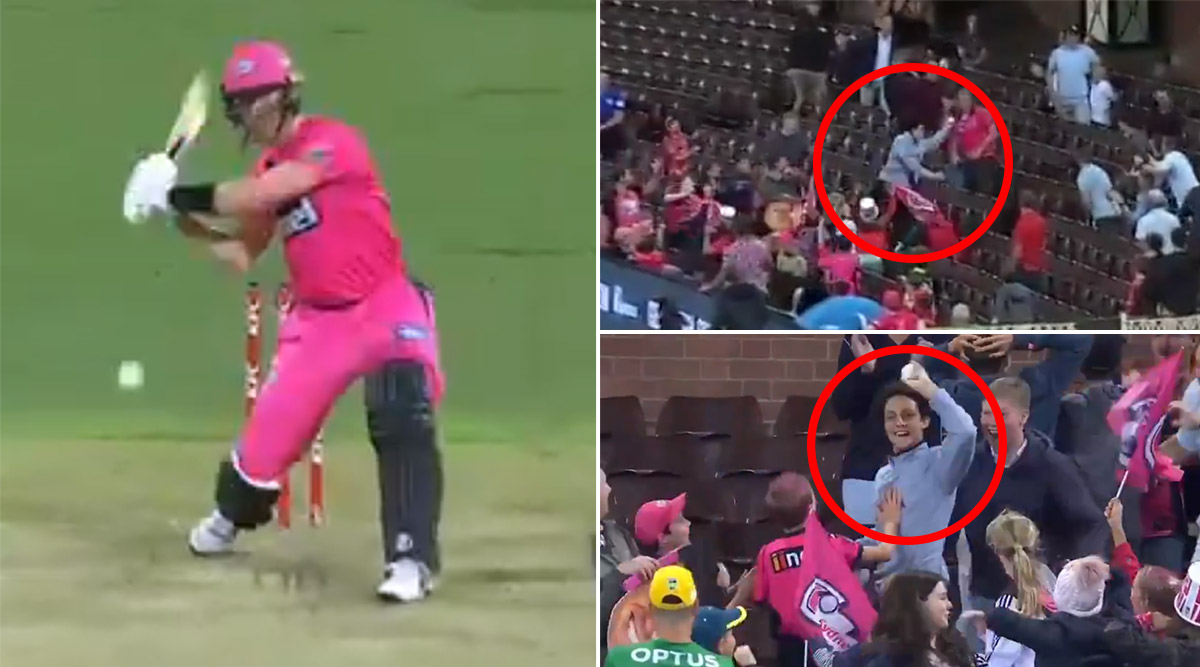 A fan in the stands pulled off a sensational catch during the Sydney Sixers vs Melbourne Stars clash in Big Bash League (BBL) 2019-20 final at the Sydney Cricket Stadium on February 08, 2020 (Saturday). His catch off Jordan Silk’s mammoth six left the commentators as well as other fans in the gasping for breath. Cricket legend Shane Warne, who was on commentary duty when the catch was taken, screamed on-air shocked on seeing the young fan take such a stunner. “Oh, what a catch,” Warne screamed into his micro-phone as fans rushed to the young fan to congratulate him after he had completed the spectacular take. Meanwhile, Sydney Sixers lifted their maiden BBL title after a wait of seven years. They beat Melbourne Stars 19 runs in a rain-affected final to lift their first Big Bash League crown. Sydney Sixers Win BBL 2019–20, Beat Melbourne Stars to Lift Second Big Bash League Title.

The incident occurred in the final delivery of the 1oth over of Sydney Sixers’ innings when Josh Philippe and Jordan Silk were at the crease. Captain Glenn Maxwell and Adam Zampa had already reduced the Sixers to 68/4 with four overs remaining after the match had been reduced to 12-overs a side due to rain.

One of the Greatest Crowd Catch Ever

That will go down as one of the great crowd catches in Big Bash League history! #BBL09

Josh Philippe, however, continued his good form and was kept on hitting the runs. Jordan Silk then joined the opener when Maxwell trapped Daniel Hughes plumb in front of the wicket in the eighth over. Together they started rebuilding the innings with quick singles and twos until Nathan Coulter-Nile’s final delivery in the match.

Best crowd catch ever according to Shane Warne! What a beauty #BBL09 https://t.co/uFBdL5aKSB

Silky Shot and a Silky Catch

That is a great catch in the crowd, moving back to his left.

I can't get over this catch.

Makes everything worthwhile tonight, the waiting, the rain, everything.

Even Marcus Stoinis Was Clapping

Love the fact even Stoinis was clapping that crowd catch #BBL09

It was a short ball, on length and Silk dispatched it over deep mid-wicket into the stands. A huge 96m six. But the catch that followed out-shadowed his Silk’s great shot. With the fall racing away from him, the young fan flickered his hands and pulled off a stunning catch. “The old classic catches, that’ll be winning the summer. Look at him he’s pumped, chest pumped. Marcus Stoinis is smiling too. He knows that’s a screamer. I reckon that’s the best crowd catch we have ever seen,” Warne added in the commentary. Fox Sports identified the fan Ross, a Sydney Sixers fan.