Shankar has been one of the consistent performers for Tamil Nadu in the domestic circuit and has also played a crucial role in his side’s success. Shankar has even donned the Indian jersey and has shown glimpses of his potential at the highest level too. Making his international in March 2018, Shankar didn’t enjoy the greatest of starts. 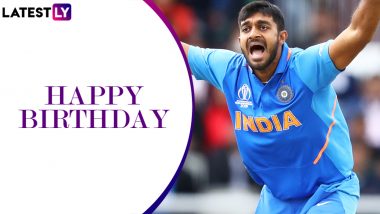 Indian all-rounder Vijay Shankar celebrates his 29th birthday on Sunday (January 26, 2020). Hailing from Tirunelveli in Tamil Nadu, the cricketer is a solid batsman who scores runs at a brisk pace along with being a handy bowler who can chip in with some overs. In fact, Shankar has been one of the consistent performers for Tamil Nadu in the domestic circuit and has also played a crucial role in his side’s success. Shankar has even donned the Indian jersey and has shown glimpses of his potential at the highest level too. Hardik Pandya Removed From India A Squad After He Fails Fitness Test, Vijay Shankar Replaces Him For Series in New Zealand.

Making his international in March 2018, Shankar didn’t enjoy the greatest of starts and he had a pretty ordinary outing at the Nidahas Trophy. In fact, he also faced a lot of bashing for his dismal batting performance in the finals of the tournament against Bangladesh. Nevertheless, the all-rounder made a brilliant comeback a year later and also sealed his berth in India’s 2019 World Cup 2019. Unfortunately, he sustained a hamstring injury and was ruled out in the middle of the tournament. Nevertheless, he recovered soon and began showing his blitzes in the domestic circuit. Meanwhile, let’s look at some remarkable performances by the all-rounder.

The all-rounder delivered with both bat and ball during the 2nd ODI of Australia’s 2019 Tour of India and played a crucial role in his side’s victory. Batting first, Shankar came out to bat at number five and up the ante. He brilliantly tackled the Aussie bowler and scored a 41-ball 46, guiding the host to 250 in the first innings. In reply, Shankar came good with the ball too. Defending 11 runs in the final over, the pacer took two wickets and guided India to its 500th ODI win.

63* Against Gujarat Lions in Kanpur

Playing against Gujarat Lions in the 2017 edition of the Indian Premier League (IPL), Shankar put on a magnificent batting display and guided Sunrisers Hyderabad (SRH) to a thumping victory. Chasing a total of 155 runs, Shankar was sent in to bat at number four and he didn’t disappoint. He attacked the bowlers from the outset and gathered runs even quicker than his skipper David Warner. The batsman scored 63 runs in total and helped his side register an eight-wicket win.

129* Against Assam in Chennai

Another Vijay Shankar special was seen during the Tamil Nadu vs Assam clash in the 2018 edition of the Vijay Hazare Trophy. Batting first, skipper Shankar came out to no. four and wreaked havoc against the Assam bowling line-up. He scored runs to all the parts of the park and that too at a rapid pace. He, eventually, went on to register his second hundred in List A cricket and helped his side register 334/4 in the first innings. In reply, Assam couldn’t succumb to the pressure and lost the match by 130 runs.

As of now, Shankar is currently with India A squad who are playing New Zealand in a three-match unofficial ODI series. With the series being perfectly poised at 1-1 after the first two matches, the last match will be a deciding encounter. The clash will be played on Shankar’s birthday only and the all-rounder will eye to celebrate the occasion by putting a brilliant performance and guiding his side to a win.

(The above story first appeared on LatestLY on Jan 26, 2020 08:00 AM IST. For more news and updates on politics, world, sports, entertainment and lifestyle, log on to our website latestly.com).