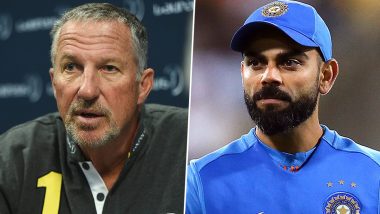 Indian captain Virat Kohli is arguably the best batsman in modern-day cricket and his record in all forms of cricket is nothing but staggering. The right-handed batsman has already slammed 70 international centuries in his career spanning over a decade and with being just 31, many cricket experts and pundits back him to go past Sachin Tendulkar’s tally of 100 international centuries. Along with his batting prowess, however, Kohli is known for his aggressive captaincy style on the field and his tendency to get under the skin of opposition has guided India to several victories. Recently, former England all-rounder Sir Ian Botham heaped praises on Kohli and said he would have loved to play against the talismanic batsman. Wasim Akram Reckons Sledging Virat Kohli Would Have Given Him Chance to Dismiss the Indian Captain.

“Virat takes the game to the opposition, he takes a stand for his players. I would have loved to play against him. He is the right guy to take Indian cricket forward,” said the legendary all-rounder as quoted by Times of India.

Botham also presented his opinion on who’s the better all-rounder between Ben Stokes and Andrew Flintoff. He went with the 2019-World Cup winner for his incredible performances and called him a mile better than Andrew Flintoff. He even said that Stokes reminds him of himself.

“Ben (Stokes) is better than a mile to Freddy (Andrew Flintoff). Ben Stokes is the closest version of me, he plays like me with his heart on his sleeve. Flintoff was good but Stokes is just exceptional. He is the best cricketer in the world now,” he added.

(The above story first appeared on LatestLY on May 28, 2020 04:33 PM IST. For more news and updates on politics, world, sports, entertainment and lifestyle, log on to our website latestly.com).