India Bowled Out for 92 Against New Zealand, Here’s the List of Indian Cricket Team’s Lowest Totals in ODIs 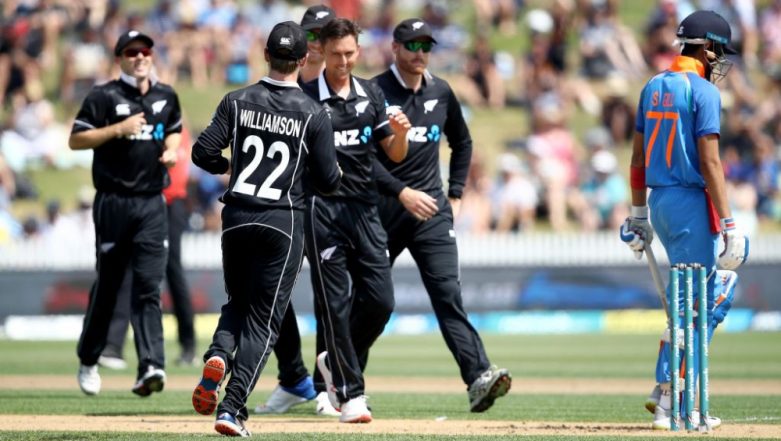 India slumped to their seventh-lowest total in One-Day Internationals (ODIs) after being bowled out for just 92 runs at the Seddon Park in Hamilton. Put to bat, Indian batsmen failed to counter the swing as New Zealand bowlers kept picking wickets. Trent Boult returned with figures of 5/21 as he did the bulk of the damage. New Zealand then completed the chase in 14.4 overs at the loss of two wickets. IND vs NZ 4th ODI Full Scorecard.

Apart from being team India’s seventh-seventh-lowest total, 92 is now their lowest score in ODIs in New Zealand. This is also just the third instance when India were bundled out under 100 runs in the first innings of an ODI match. Not Virat Kohli, MS Dhoni is India’s 'Mr Dependable', Twitterati React After Men in Blue Bundled Out for 92 in 4th ODI vs New Zealand

India’s lowest total in ODIs remains 54 against Sri Lanka at Sharjah in 2000. And this is the second time that New Zealand have bundled out India under 100 runs in ODIs. 88, was the first time in 2010 at Dambulla. Meanwhile, New Zealand’s victory was the biggest ODI win against India by balls remaining. New Zealand completed the target with 212 balls to spare. Previously, the record was held by Sri Lanka (209 balls).

Here’s a look at India's lowest totals in ODIs:

Interestingly, this was Rohit Sharma’s 200th ODI. He was leading the Indian side in absence of Virat Kohli, who has been rested for the remainder of the New Zealand tour. India also were without the experienced MS Dhoni. The wicketkeeper-batsman missed the third ODI with a sore hamstring and seems has not recovered from it fully. Shubman Gill Makes Debut, Handed Team India Cap by MS Dhoni Ahead of IND vs NZ 4th ODI

With Kohli not available, young Punjab batsman Shubman Gill was handed the ODI debut. Meanwhile, India have already won the series after registering victories in the first three ODIs. The five-match ODI Series currently stands at 3-1, with one game to go.